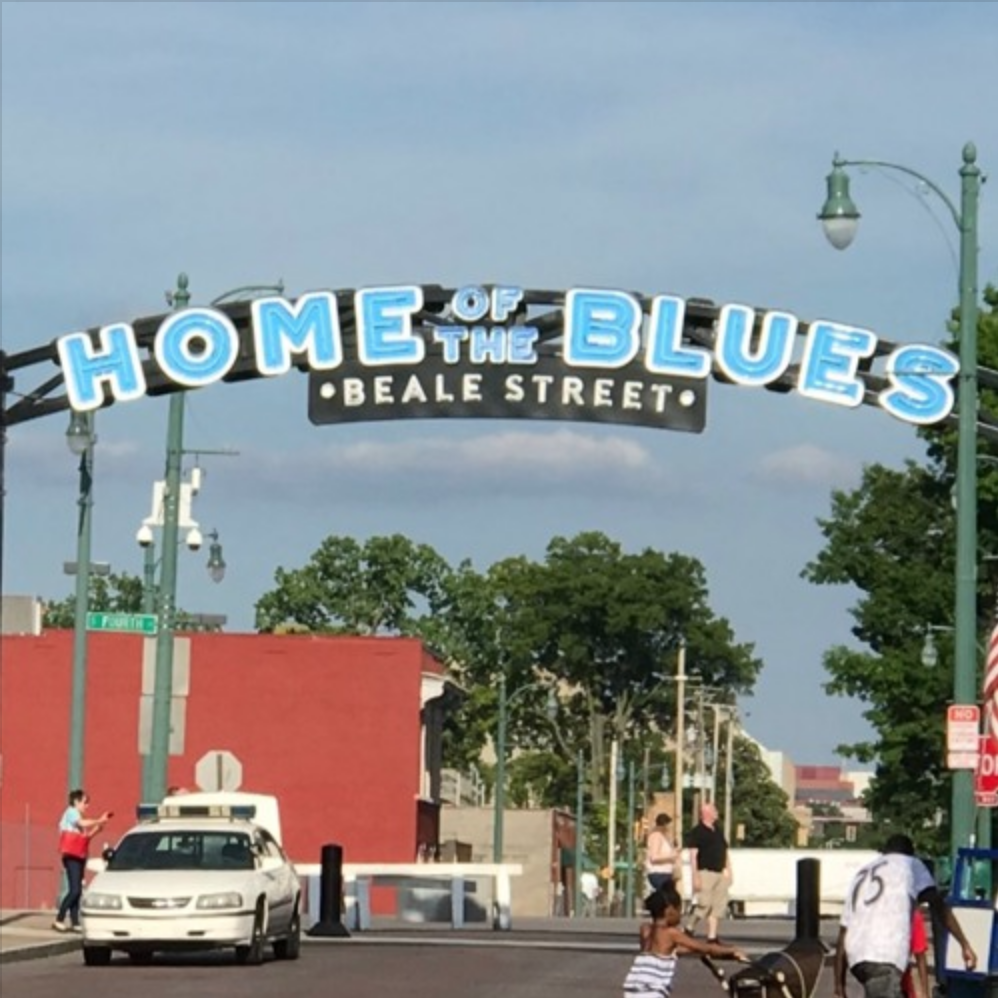 Giles Robson is considered by blues fans and the blues music industry as one of the world’s most exciting blues harmonica players.

In 2019, he was nominated for a Blues Music Award in Memphis, the highest honour in the blues world, for his album Journeys To The Heart Of The Blues on Alligator/Munich Records. It features Giles on harmonica, guitarist and singer Joe Louis Walker and pianist Bruce Katz.

The trio went on to win the award, making Robson one of only three British or European artists to win at the awards in its forty-year history (The other two winners Peter Green and Eric Clapton).

However, Giles is not from the USA, he’s from right here in the UK. The documentary sees BBC’s Carrie Cooper follow him across the Atlantic Ocean to the prestigious Blues Music Awards in Memphis and beyond to renowned blues cities Chicago and Clarksdale Mississippi so they, themselves, can take a Journey To The Heart Of The Blues.

In Clarksdale Mississippi they ponder the possible site of the mythical crossroads, where Robert Johnson allegedly sold his soul to the devil and in the deep Mississippi Delta countryside they visit the grave of the legendary harmonica player Sonny Boy Williamson.

Along the way the way they meet some of the music’s most legendary figures such as Buddy Guy, Bobby Rush and Billy Branch plus some of Blues‘ younger up and coming legends such as guitarist Kick Fletcher and figureheads of the industry such as the head of the Blues Foundation, Barbara Newman and Alligator Records boss Bruce Iglauer.

Giles is a great example of how the blues has become a worldwide phenomenon and during their Journey, they meet musicians from as far afield as Australia, France and even Russia who have decided to dedicate their lives to the music.

With an incredible soundtrack of classic blues tracks and some of the best contemporary tunes from the artists they meet, Journey To The Heart Of The Blues is a fascinating and exciting listen for music fans. It’s also proof that this dynamic and emotionally rich music is still alive and kicking in the 21st Century…. and not only in America but across the world.

The documentary ends with Giles heading to New York to record his new album Don’t Give Up On The Blues, and he talks about the tracks and how what he has experienced has found its way into his approach to his new material.

The 2-hour documentary Journey To The Heart Of The Blues will air on BBC Radio on 14th September at 8pm – following this a link will be available for playback to worldwide listeners via BBC iPlayer.

For more info on the record label go to – Alligator Records

Giles Robson also has a new album coming out on 20th September, which he describes as having 12 original gritty electric blues tracks. The new album Don’t Give Up On The Blues is his USA recording debut album with Alligator Records.

Giles Robson was interviewed in Issue 105 – if you’d like a copy of this edition then please click the subscription link below. 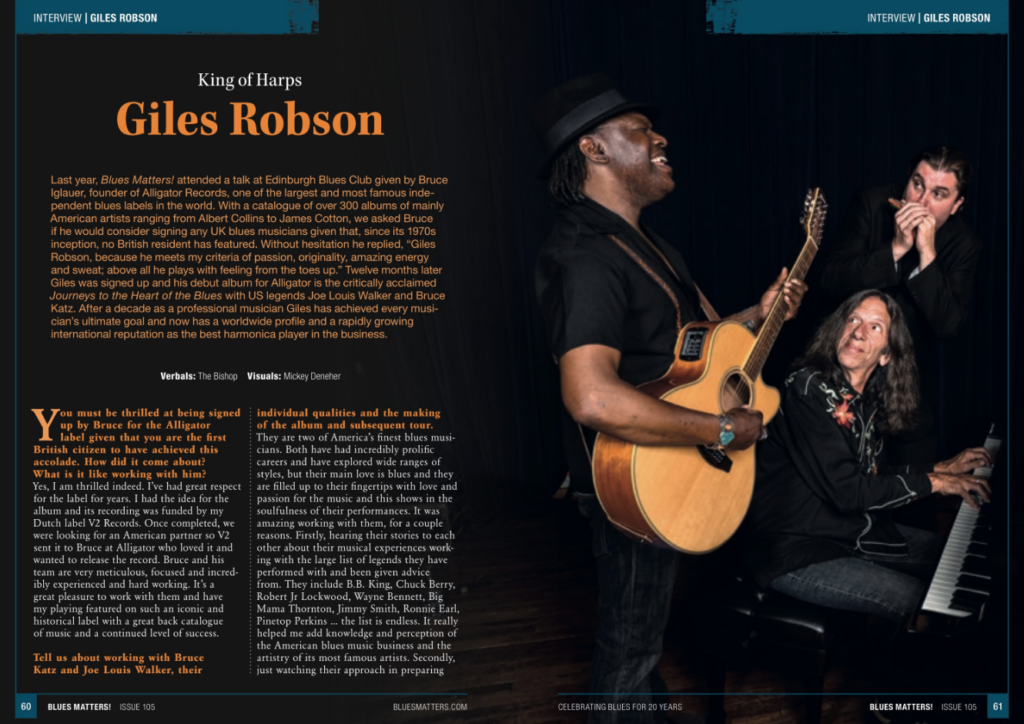 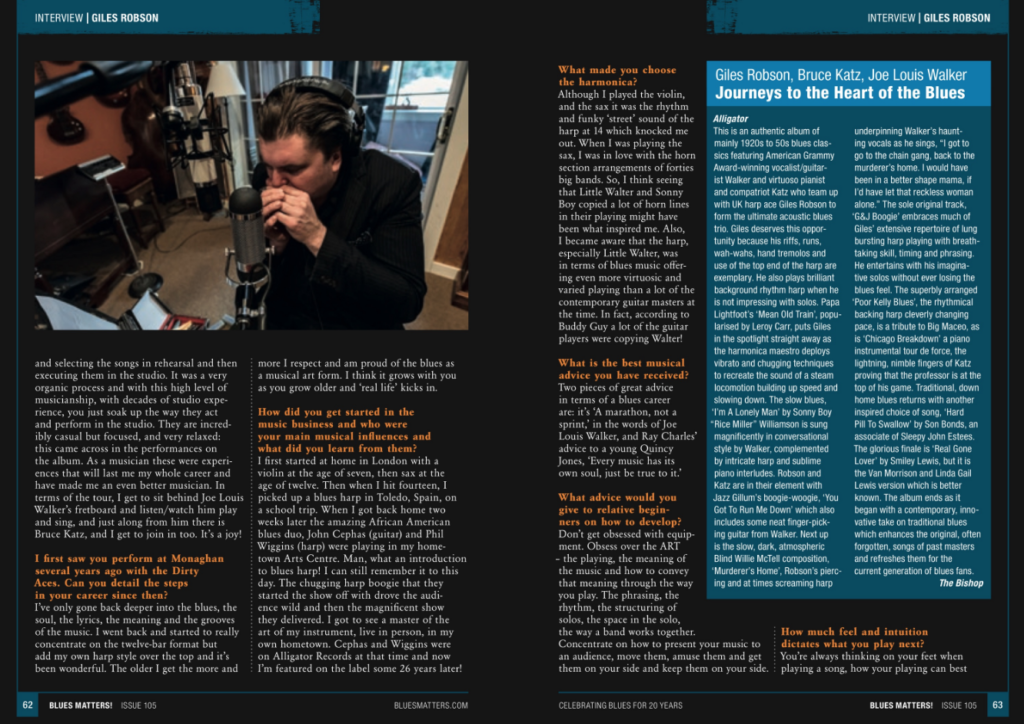 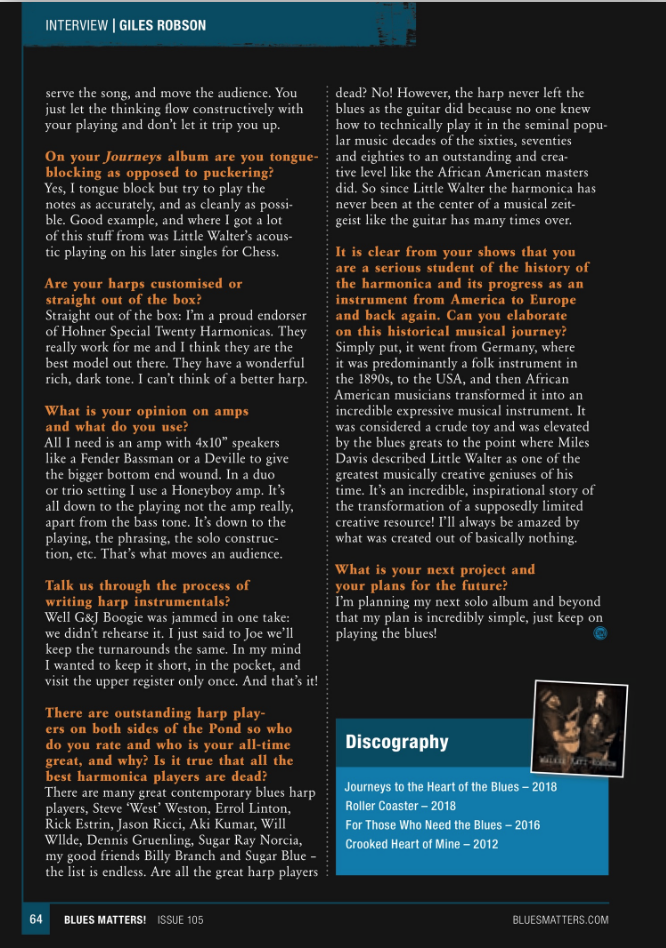