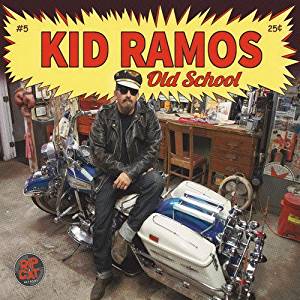 This album kicks off with a tribute to the legendary B.B. King and the Kid himself demonstrates his own guitar playing and if he’s not an identikit of BB then he’s not far short of it with a dexterity that has been honed over many years.

The first track is “Kids Jump” which will be old school in itself and much to be praised for.

This is swiftly followed by the sultry vocals of Kim Wilson pleading for “All Your Love” despite what the album cover says on vocals, it surely is not Ramos’ son Johnny.

Kid Ramos has been away from the recording studio for nigh on 18 years and has gone through a host of trials of the non-legal type, yet there is no rust in this performance.

Track four has me salivating over the guitar playing if not the culinary title “Mashed Potatoes And Chilli”, for me this is a dish too far, but the music is to my taste.

The raw vocals of Johnny Tucker on track six “You Never Call My Name” allied to the guitar work of the Kid himself is in my humble opinion, a diamond of high carat.

This, in turn, is swiftly topped by a quartet of real blues in the form of Ramos’ on guitar, Bob Welch on organ, Kedar Roy on Bass and subtle drumming support with Marty Dodson with Track eight “Wes Side”.

This album won’t set the heather alight in the UK, and that is a pity as it deserves a wider audience!

It’s worth a punt if you like your blues with a hint of Americana.