KENNY WAYNE SHEPHERD BAND Lay It On Down 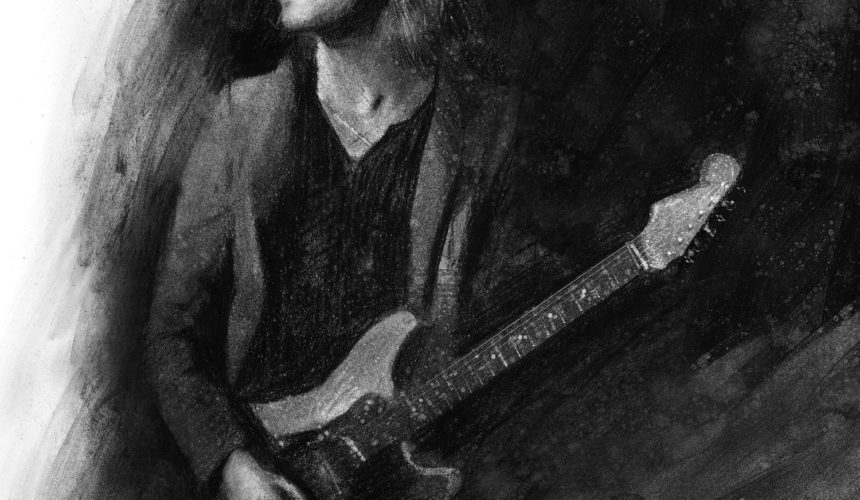 Lay It On Down is a tracklisting that runs the musical gamut, with songs that will be embraced by Shepherd’s long-standing fans, alongside moments that strike out in fresh directions. “Baby Got Gone, Ride Of Your Life and Down For Love. Those songs have what a lot of people will expect to hear from me and my band.

Blazing guitar, rocking grooves, aggressive playing and stuff” he explains. “But I wanted there to be a variety of textures and grooves and feelings and emotions conveyed through this record. So Nothing But The Night doesn’t sound like any other song we’ve ever recorded. It’s a smoky, vibey kind of song.” 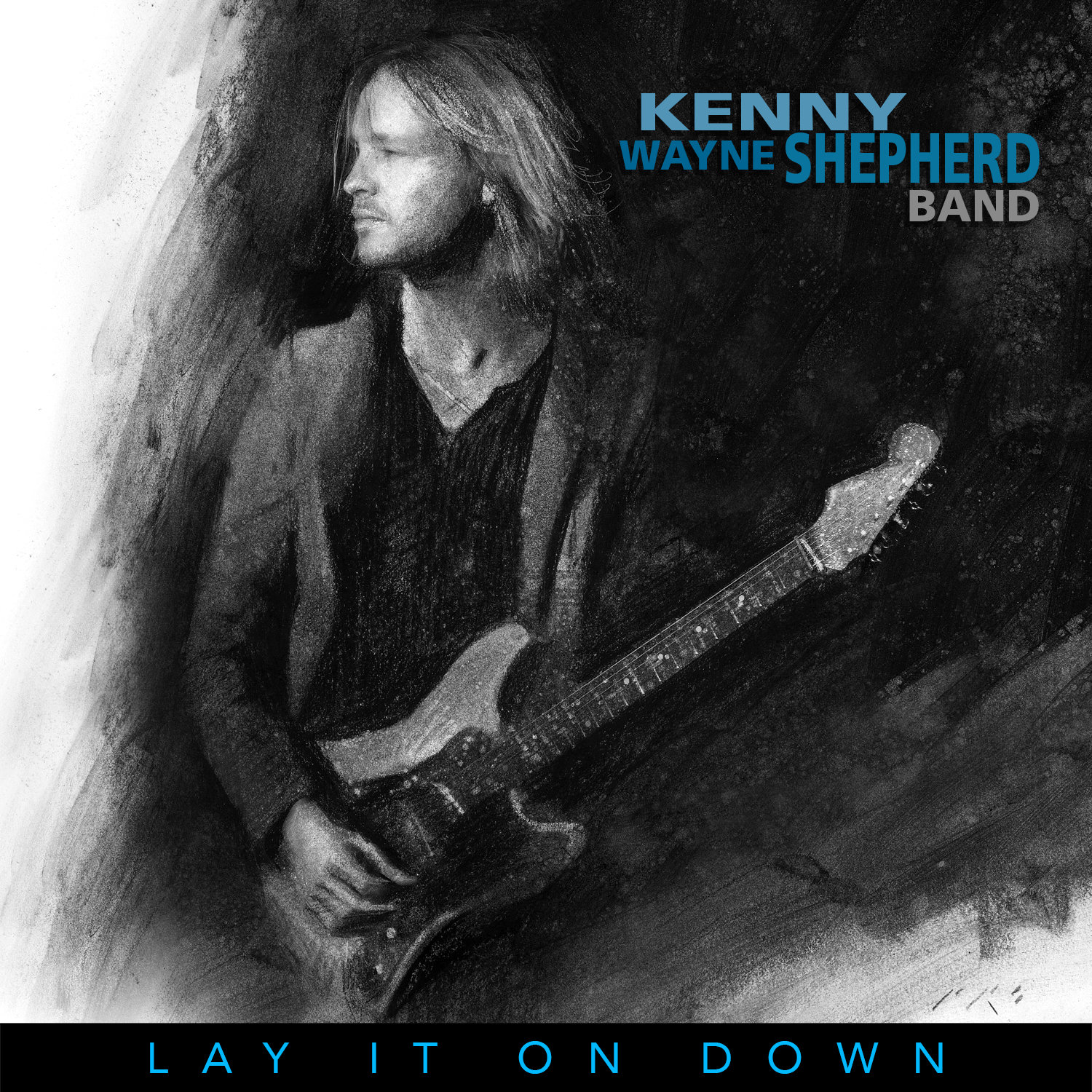 His latest work is an of-the-moment album that invites the listener into Shepherd’s headspace at this time in his life. Yet on songs like Louisiana Rain – saluting the home-state where Shepherd came up as the music-obsessed son of a radio personality – this fascinating album also joins the dots to the formative events that led him here. “That song is personal,” he nods. “It’s written from my experience. Because no matter where I go in the world, there’s always something that brings me back to Louisiana. That place will always be my home.”

The opening chapters of Shepherd’s journey have a distinct sense of destiny. There was the family vinyl, the epiphany of meeting Stevie Ray Vaughan, the dubious first electric guitar (“A Strat-shaped Yamaha SE-150, made of crappy plywood”), the stage debut at 13 and the record deal at 16, with 1995’s million-selling debut album Ledbetter Heights laying down his calling cards of soul-fingered fretwork and searingly honest songwriting.

Even as early singles like Déjà Voodoo and Blue On Black infiltrated the US Top 10, and hysteria duly erupted around him, Shepherd’s artistic vision remained admirably mature on turn-of-the-millennium million-sellers like Trouble Is… (1997), Live On (1999) and The Place You’re In (2004).

He has supported The Rolling Stones, B.B. King, Van Halen, Lynyrd Skynyrd, Aerosmith, Bob Dylan and the Eagles amongst others, performs as part of the Experience Hendrix tour and is one-third of supergroup The Rides with Stephen Stills and Barry Goldberg.

Rather than follow the typical young-gun trajectory of breakthrough and burnout, Shepherd pursued the music, “I never walked around going, ‘I’m famous’,” he adds of the circus that saw him splashed across media outlets from Rolling Stone to Letterman.

“I mean, I’ve had my own struggles in the past. But I’m one of the lucky ones who was able to get away from the things that were pulling me down. I just don’t feel the need to live a self-destructive life. There’s nothing that enhances my day-to-day experience like love and music.”

Lay It On Down began when he headed South to write alongside the cream of Nashville. “I’ve been pretty busy over the past several years, between my band and The Rides,” he adds. “But when I got gaps in my schedule here and there, over the last year-and-a-half, I’d make trips to Nashville to write songs for this new record. Some people I’ve written with my entire career, like Mark Selby and Tia Sillers. Then there were some new people, like Danny Myrick, Dylan Altman and Keith Stegall and my co-producer, Marshall Altman.”

These songs are eloquent snapshots, taken both from Shepherd’s own life and others. “This album is somewhat of a window into my soul,” he says. “But it’s also a window into my observations. Hard Lesson Learned, that’s a painful song. It’s a guy who falls madly in love with this woman, and she’s just bad news for him.

Baby Got Gone, that’s just about this whimsical girl. The guy is kind of infatuated with her. She’s beautiful, she’s fun to be around, but she can’t stay in one place too long. She’s just kinda beyond commitment, a free spirit.”

Elsewhere, Lay It On Down pinballs from escapist fantasy to harsh reality. “Every song is on there to tell a good story,” explains Shepherd. “And I think if you listen to the album in its entirety, each song takes you on a different journey.”

“Lay It On Down,” he says of the title track, “is written about people I know that carry a burden in life and don’t feel they’re good enough. It’s about the beauty you see in someone that they can’t see in themselves. That can be sad to me sometimes, and I always want to let that person know.

Your mother. Your daughter. Your son. Your wife. At some point in life, we all feel that we’re not good enough. So that album title – Lay It On Down – you can interpret in a couple of different ways.

It could be about letting go of life’s struggles and not trying to carry the load by yourself. Or it could be like when a band is really cooking and really doing what they do best and laying it down.” 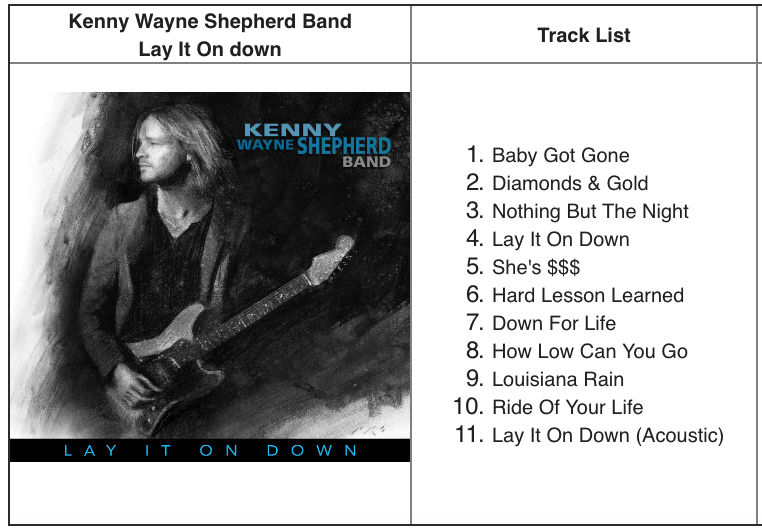