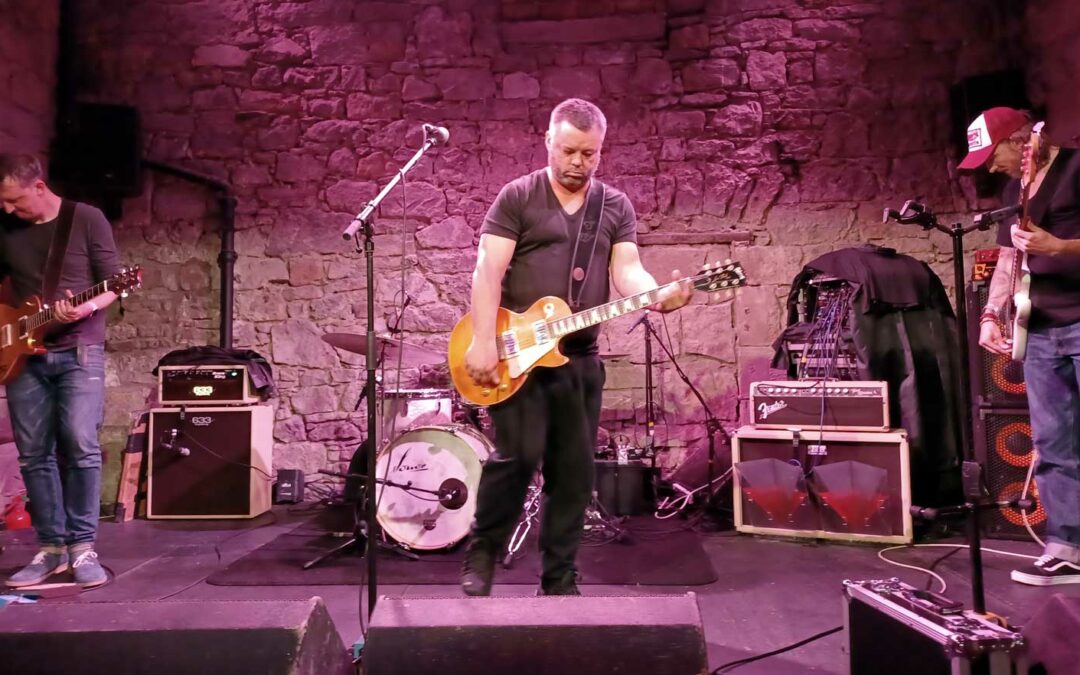 Sunday 15th August saw the return of live blues music to Edinburgh Blues Club. This was particularly special as it was a member-only event. A new venue for the Club, saw the event take place at an unusual venue called the Caves in Niddry Street Edinburgh. A large, cavernous stone building with interesting acoustics, a labyrinth of tunnels adding to an ethereal feel for this first event. Well attended in the main, as it is Edinburgh Fringe Festival time and so many other events going on in the Capital. Also being the first time, the Club had managed to put something on there was a feeling of anticipation and excitement, mixed with cautious planning.

Those who attended enjoyed the whole experience. General feeling was it was brilliant to get live music back up and running. There were technical glitches during both sets, but the sound equipment had also not been used since before lockdown, so no surprises there, just add to the raw feel of getting back to live music. 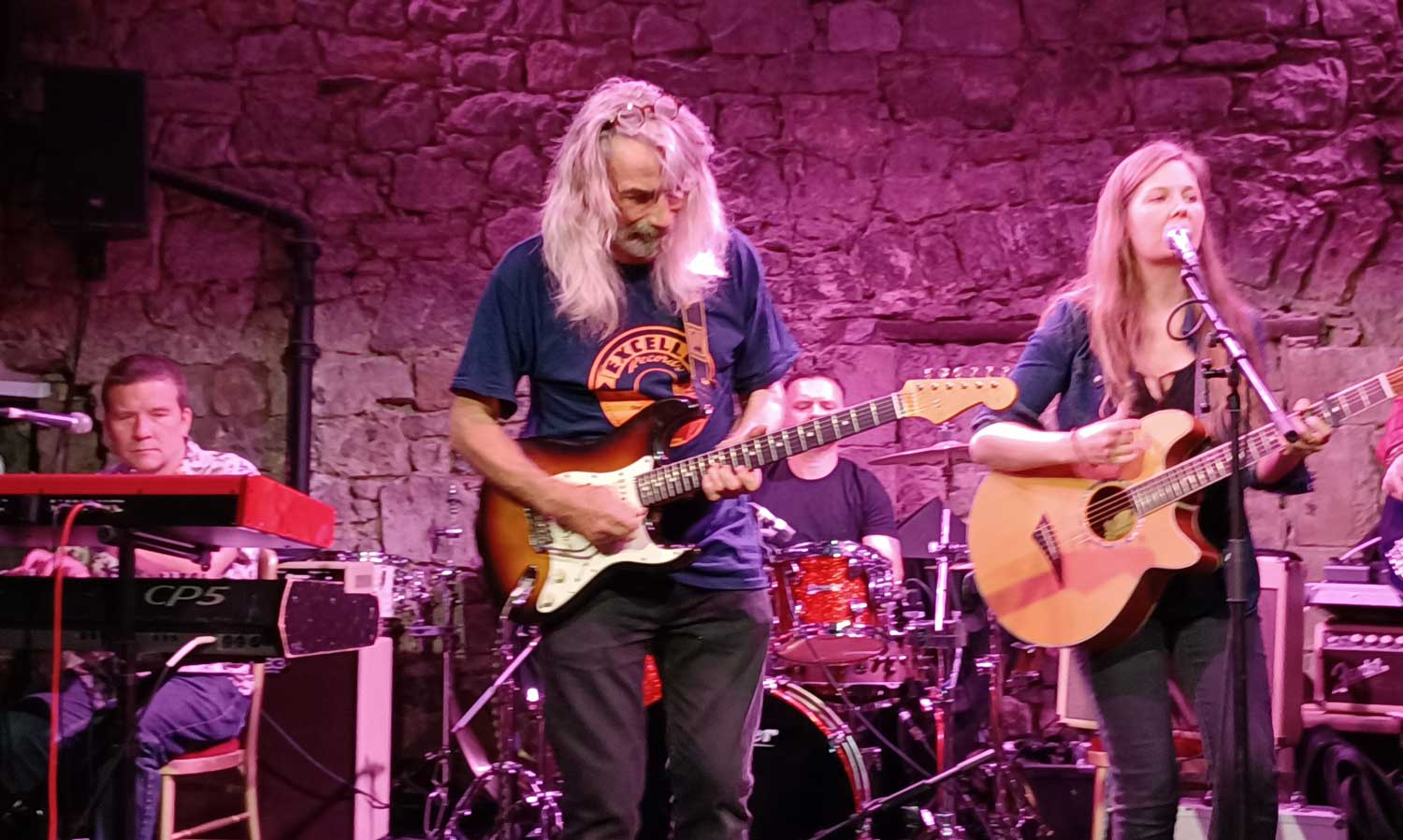 Anyway, onto the music, first to take the stage were popular local band Liz Jones & The Broken Windows. They played a set of mostly original and new songs. They mix all kinds of styles and genres with their own musical take, there’s blues, folk, rock and even Latino twists noticeable. Strum was the first tune, an upbeat tune, Liz’s powerful smoky vocals taking centre stage.

A brilliant rhythm section with Gary Davidson on drums, Suzy Cargill on bongos and Rod Kinnaird on bass keeping it sweet as they did through all the songs. Before Me, had a great laid-back blues sound, featuring phenomenal keyboards by Jamie Hamilton, great all-round sound. Wendy had the audience in raptures with some magical guitar slaying by the wonderful John Bruce. Jo, a new track was introduced as a song about small town mentality had smooth and crisp tones. Angel was delivered well, an acoustic vibe here.

The Rolling Stones cover was a stripped-down version of Play With Fire, but when the drums came in, it really added a different layer. Karma, another band original was a very dreamy, almost psychedelic toned tune, the sound reverberating through the Venue, just sublime. Stain was just superb, the rhythm to this is toxic and showcased this talented band of musicians. They finished with, Call Centre Blues another new tune. Altogether a great opening act, very professional and with pure musicianship and emotion. 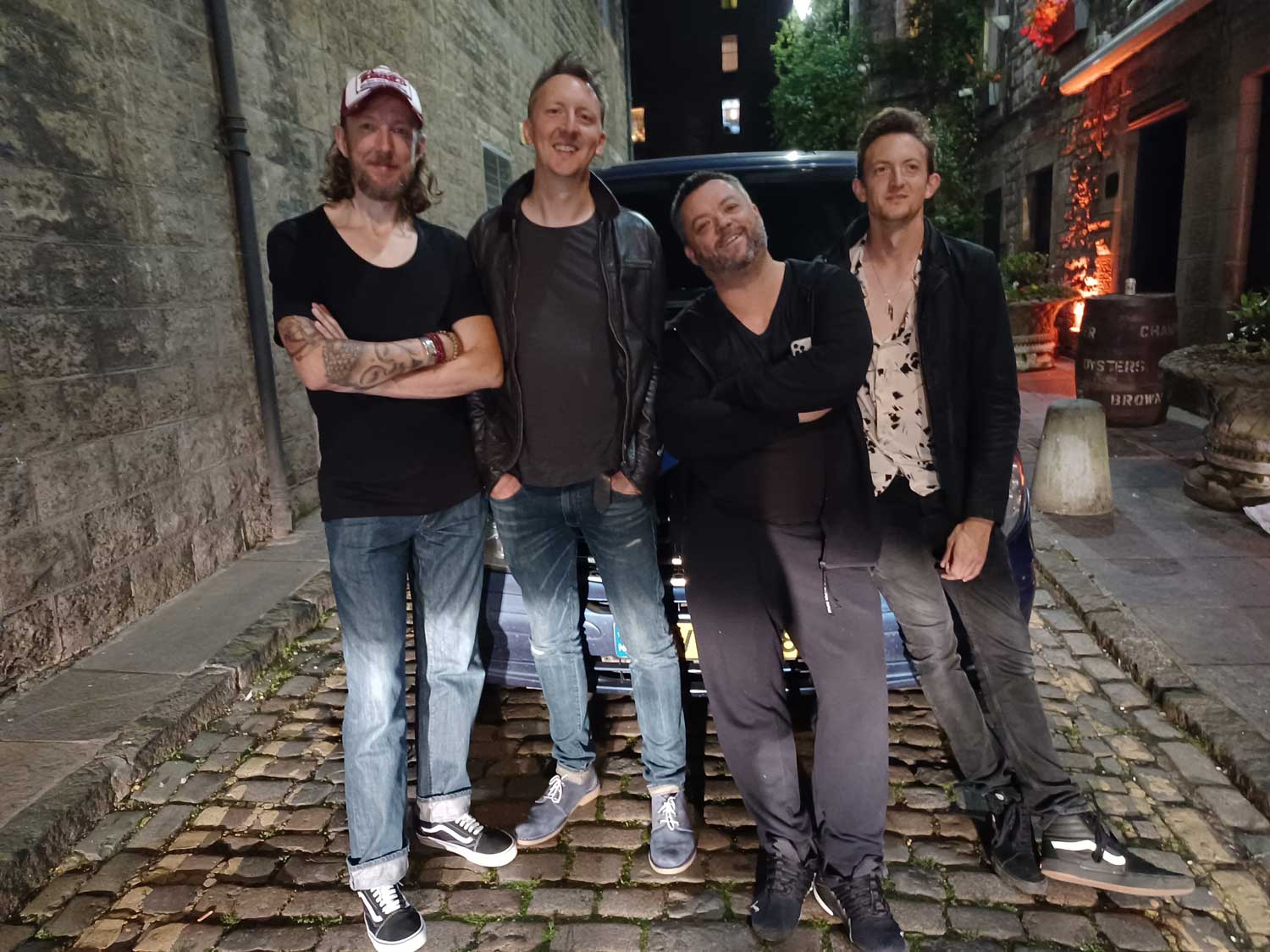 Sean Webster Band took to the stage with an air of confidence and poise. Sean, now based in the Netherlands had great difficulty bringing his European touring band over, so had to improvise and use some of his old chums from the UK for a short run of mostly sold-out events. No need to worry about the calibre of musicians available with Sean on lead vocals and guitar. He joined forces with Ash Wilson on guitar, what a chemistry these two showed throughout the performance especially during the jamming, call and response style exchanges which were just mesmerising in parts. Sometimes you didn’t know who was playing what guitar at points, it was so good. Rhythm section was also excellent with bass chords provided by the mysterious and laid-back Greg Smith and on drums Phil Wilson keeping the steady beat going throughout this wonderful rocking blues set. The sound was palpable and very loud in places, certainly a feature throughout and appreciated by the listening audience but the reverb in such a cavernous place added to the atmosphere.

Starting with the mellow tones of Not Me And You, the band just went into overdrive straight away. Give Me The Truth tempered the rhythm, with Sean delivering sweet vocals blending with a steady beat. Then into, Slow Dancing In A Burning Room, this was just a masterclass in guitar playing, soaring and seething solos peppered this outstanding delivery, the sonics suiting the cavernous venue and the vocals were superb. The Mayor, saw Sean and Ash switching lead guitar riffs with haunting grungy vocals. Hands Of Time next filled the room. Forever Gone Away is a new tune, a slower bluesy number, Sean’s vocals again resonating with the backing rhythm of the band. Another pulsating highlight was Hear Me Now, emotionally charged, uplifting guitar styles, this has it all and the audience were in raptures at the end of this stunning tune. Til Summer Comes slowed the pace, a great choice of song again for the band’s structure. After Highwayman, the band let Sean introduce I’d Rather Go Blind a firm favourite, it was just delightful in tone and melody and sung with the passion of someone who has lived and felt these lyrics.

Great band, good sound, a brilliant passionate performance, this is what we’ve been missing with live music. Many thanks go to the organisation of this event, just so good to get out there as an audience member or artist, the connection there is the strongest part, no mistake. Everyone left the venue happy in the knowledge that the Club is back up and running providing a varied and interesting blues infused programme of events to follow in the future

For further details about joining the Club and future events see website for details: www.edinburgh-blues.uk