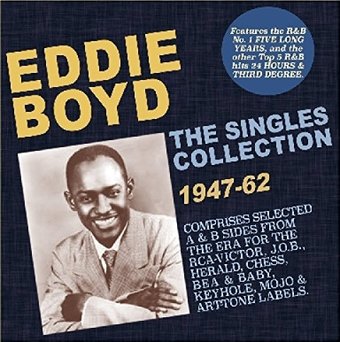 If you are not familiar with Eddie Boyd, then this is the perfect way to start your education. Starting his career as Little Eddie Boyd in the 40’s writing and performing his own songs like the opening track I Had To Let Her Go.

Swing jazz and blues are all on show here with great piano playing from Boyd himself. Ether performing alone or as part of a band, it all comes so easy.

In songs such as Rosa Lee Swing, it’s easy to see the influence he had on future players. Fats Domino especially springs to mind on this track. Boogie-woogie piano as part of a band showcases Boyd’s talent as a singer-songwriter and musician.

Looking at the track listings it would be remiss of me to pick out a favourite, but Mr Highway Man would most definitely be very close to the top of the list. Authentic downbeat blues telling stories of the road is just as much a part of his make up as it is for any other blues stalwart.

Five Long Years is probably his most famous number but there is much more to him than just that. Of course, when the likes of Clapton, B.B. King and Hooker to name but a few who recorded this song then you know you are dealing with a man of substance and one that is revered by his peers.

Disc two showcases his work at Chess which surely had more of a blues influence on him than in the early years, Drifting is a fine example of this. A raspier hard vocal and definite lean-to harder storytelling of the blues is so evident here.

Four Leaf Clover continues the tale of typical blues folklore. A woman, gambling, and the inevitable clash with the law, Eddie Boyd delivers it as if he were born to it.

Operator finishes the collection perfectly. A moody tale of despair that is told so eloquently by a master. This collection is a must for any blues fan. Enjoy.