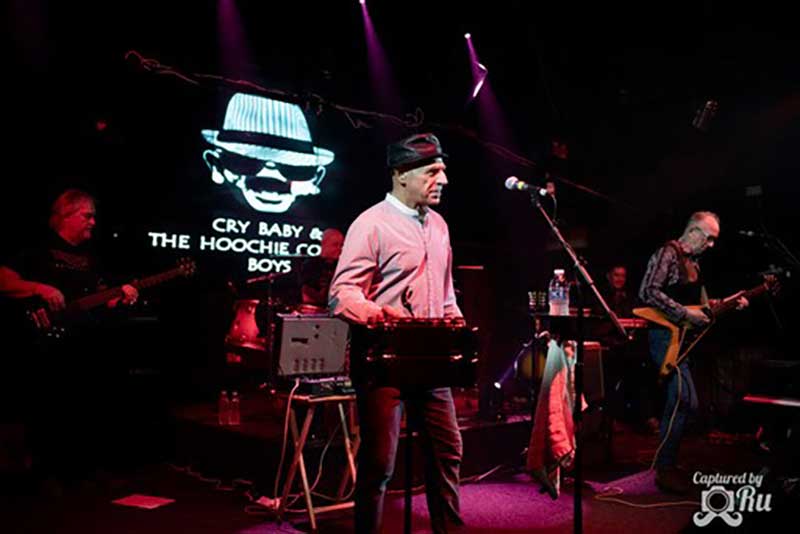 This was a first in a couple of ways on Friday night. Even though both bands are quite local in my area, I’m sad to say that I’d never seen either of them before, although I’ve been friends with a couple of members for quite a long time. So, I kinda made up for lost time. A couple of weeks before the gig, Rob Wilkinson (singer/harmonica) with Cry Baby asked me out of the blue if I would MC the night’s proceedings.

Well, to say I was flattered is an understatement. Goodfellas took to the stage with one of their own songs, Forget About It. This four-piece band certainly know their way around the blues. There were covers and original tunes which provided a great balance to the night. Songs such as Talk To Your Daughter (Robben Ford) and Help The Poor,(B B King). The band was tight and on the ball for the whole of their set, the audience dancing and singing along with the band. After an hour and a half, it was time for the last tune from Goodfellas, a stung rendition from John Mayall’s Blues Breakers Beano album.

Cry Baby took to the stage around 9 pm. The band is a five-piece outfit and has the one and only Chris Bevington on bass, taking time out from his band, Chris Bevington Organisation.

This band is well steeped in blues and R ‘ n’ B and from the very first tune, this is what we got. Soft Touch ( Nine Below Zero ) which allowed frontman Rob Wilkinson to demonstrate his vocal and harmonica skills to the max. As usual Chris Bevington stayed quietly in the background lying down bass line after bassline allowing the rest of the band plenty of room for maneuver. Vince Cutliffe pounding out great blues guitar throughout the night added that touch of class that turns an ordinary gig into a special one.

It was a night of pure blues, the band hardly letting you catch your breath in-between songs. Songs from Jonny Lang, Muddy Waters, John Nemeth, and Delbert McClinton entwined with an original from the band, Zydeco Boogie, made the night go past so quickly. The band then threw in a large curve ball, Personal Jesus, once covered by Depeche Mode. Now, this was a new one on me, but as usual, the band turned it into a fantastic blues version in keeping with the night’s proceedings. All too quickly the night was over.

I mentioned earlier that I had not had the pleasure of seeing either of these bands before tonight, well let’s just say that it was well worth the wait on both counts. If you want an evening of full-blown blues then look no further than either of these bands. You will not be disappointed.