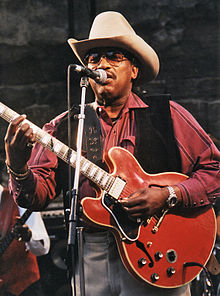 Otis Rush Jr. (April 29, 1934 – September 29, 2018) was an American blues guitarist and singer-songwriter. His distinctive guitar style featured a slow-burning sound and long bent notes. With qualities similar to the styles of other 1950s artists Magic Sam and Buddy Guy, his sound became known as West Side Chicago blues and was an influence on many musicians, including Michael Bloomfield, Peter Green and Eric Clapton.

Rush was left-handed and played as such; however, his guitars were strung with the low E string at the bottom, upside-down from typical guitarists. He often played with the little finger of his pick hand curled under the low E for positioning. It is widely believed that this contributed to his distinctive sound. He had a wide-ranging, powerful tenor voice.