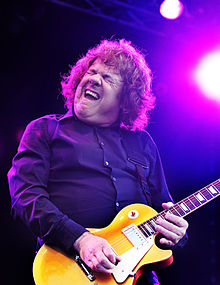 Robert William Gary Moore (4 April 1952 – 6 February 2011) was an Irish musician, singer and songwriter. Over the course of his career he played in various groups and performed an eclectic range of music including blues, blues rock, hard rock, heavy metal, and jazz fusion.

Influenced by Peter Green, Jim Hendrix and others, Gary began playing guitar at a very young age in his hometown of Belfast. Thin Lizzy founding guitarist Eric Bell, also a Belfast son, first heard Gary play on stage at the age of just 12 years old. Eric says that Gary’s talent was obvious from that young age, he would play every note and every riff of some blues and other covers he was recreating perfectly.

Gary began his international career in 1968, when he moved to Dublin at the age of 16 in search of musical adventure. It was only a matter of days before the young Gary had joined the original Skid Row band in Dublin, lead by energetic front-man Brush Shiels, who were looking for a guitarist. Gary toured the USA and released two official albums with Skid Row, and recorded a third album with them which wasn’t released until sometime in the 1990’s.

What made Gary Moore so versatile as a musician and songwriter was not only his outstanding guitar playing and great voice, but also his ability to effortlessly transcend musical genres with each band and album he was part of and/or released.

From the eccentric and unusual heavy rock style of Skid Row (Ireland) to the progressive fusion of Colosseum II, or the heavy rock sound of G-Force and the unmistakable sound of Thin Lizzy or the sweet sound of slow blues, it was almost as if Gary put a magic touch to every note.

Gary played with Thin Lizzy for a short time to help out his Dublin buddy Philip Lynnott but was always destined for a solo career. Although Gary recorded just one album with Thin Lizzy, one of his most remembered Thin Lizzy concerts is that iconic outdoor concert at Sydney Harbour in 1978. Gerry Q. tells me something that some of Gary’s fans may not know, that Sydney Thin Lizzy mega-concert half the band was Gary’s band G-Force, whose touring plans were temporarily put on hold, due to one of the band members being unable to obtain the necessary visas. So when Thin Lizzy’s own legendary drummer Brian Downey couldn’t make the Australian tour due to illness of a beloved family member, Gary’s friend and G-Force drummer Mark Nauseef stepped in to play the tour.

Gary later introduced his solo career with the album Grinding Stone. This was followed up by Back on the Streets which featured his epic first solo hit Parisienne Walkways and many more, through to the heavy celtic sound of his epic Wild Frontier and his last rock album After the War before Still Got Blues brought him back to the inspiration of his youth – the blues!

With close to 40 albums including many collaborations with other legendary artists throughout his career including George Harrision, Ozzy Osbourne, Albert King, BB King, Albert Collins, Greg Lake, Cozy Powell and many other stars too numerous to mention, this is a testament not only to Gary’s versatility as a musician/ singer/ songwriter but also to the mutual respect among his many peers.

Moore was often described as a virtuoso and has been cited as a major influence by many other guitar players. He was voted as one of the greatest guitarists of all time on respective lists by Total Guitar and Louder. Irish singer-songwriter Bob Geldof said that “without question, (Gary Moore) was one of the great Irish bluesmen”.

For most of his career, Moore was heavily associated with Peter Green’s famed 1959 Gibson Les Paul guitar. Later Gary was honoured by Gibson and Fender with several signature model guitars.

Gary was a beloved son, brother, father, friend and inspiration to so many guitarists, bands and music fans around the world, sadly taken from this earth way too soon in 2011. Today some 11 years later, on 4th April, 2022 we celebrate with Gary’s family and his legion of superfans, his 70th birthday. Happy Birthday Gary!

Read more about Gary’s life and music and buy his latest album “How Blue Can You Get” at the official Gary Moore website: https://gary-moore.com/