Being Positive! An interview with Jonathon Long 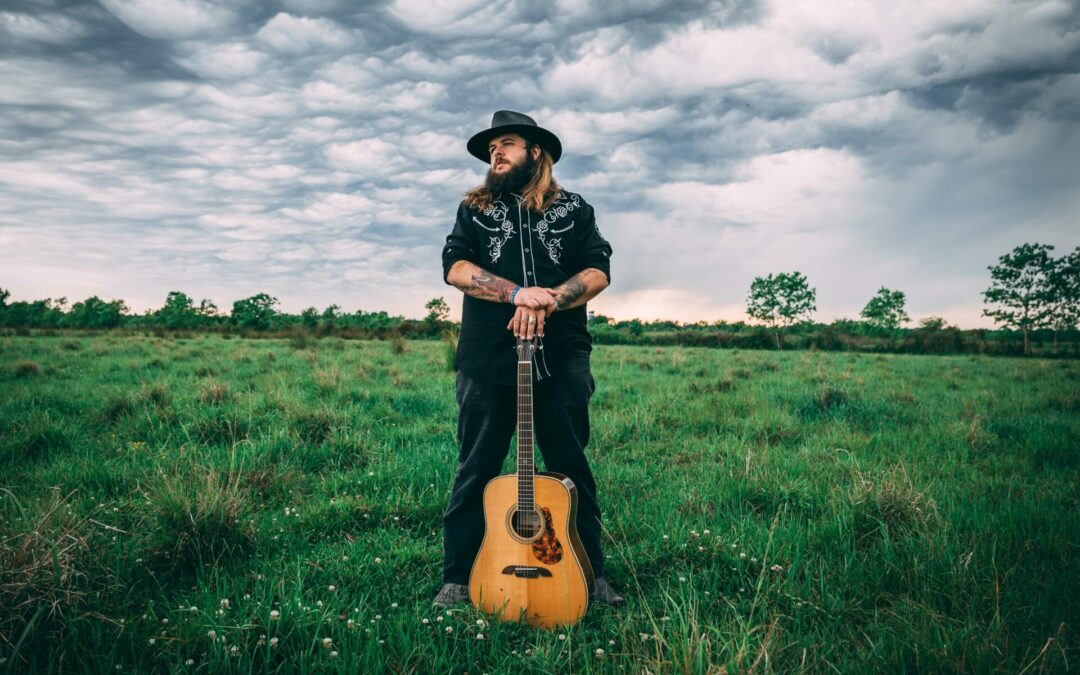 Jonathon Long comes from a long line of blues musicians who know how to play a Louisiana dance party. The Baton Rouge-born singer songwriter and guitarist was a child prodigy who was playing guitar by age six and started performing at blues jams in the Baton Rouge Club Swamp Mama’s when he was ten years old, alongside local legends Kenny Neal, Rudy Richard and Lil Ray Neal. When Long was fourteen, his parents gave him permission to go out on the road with Louisiana Blues icon Henry Turner. Long, playing bass in the band, learned the ropes on the juke joint circuit and before long knew how to please a crowd on his own. Long joined New Orleans icon Luther Kent’s blues band and began playing at the New Orleans Jazz and Heritage Festival, where he has become a local fixture. In 2011 at the age of twenty-two, going under the name Jonathon “Boogie” Long he won the “King of the Blues” award for best unsigned Blues guitar player in America and in 2012 released his first album, an impressive showcase of his blues guitar talents. His new album is his second produced by Samantha Fish called Parables Of A Southern Man on the Wild Heart Label. Recently Blues Matters got in touch with Jonathon at his home near Baton Rouge.

We started with getting a little background to his interesting musical career. He has always had a Gospel background, his family sung in church. He got his first gig at eleven years old. He dropped out of High School at fourteen. He started touring, playing Reggae music. He played with Luther Kent and his big band. He went on to be hailed King of the blues as best unsigned blues guitarist, whether this was true or not, he wore the right suit on the right day and won the prize! He toured with BB King two years later. He fell in love with his band and the sound and helped getting signed agreements and the rest is history literally! “We took Boogie out of my name to stop people getting a preconceived notion about the style of music I play. Here we are two records into the Jonathon Long side of things, and we try and promote positive music with a positive message and hopefully have a little something for everybody, that kind of sums it up!”

He says his music is a gumbo of styles. It’s all rooted in blues, but he writes so many different styles, from folk to blues to Americana and Rhythm and Blues, soul, jazz. His goal is not to capture one specific audience but have at least one or two songs on a record that people who listen to all music types can connect with. “I have friends who listen to nothing but alternative radio who like a couple of my songs and that’s the goal. It doesn’t have to be people who listen to BB King bluesville or a Govt Mule Spotify list”. He tries to reach a broader audience.
His parents signed Marshall custody of him at fourteen years old to Henry Turner Junior, so he could be his legal guardian and he could play music in Clubs all over the country. He grew up wanting to be a High School band Director. He played French horn and trumpet at school. His own school band Director said, “I’m moving you to last chair and taking away all your solos”, He remembers, “I don’t see this as a test, but I went to the Office and said to them he would get a gig and drop out of school”. They said it was the teacher’s decision. He believes he was home schooled; “You’re not supposed to drop out until you’re sixteen. They never came looking for the work I did then, I was gone!

Music is what he first connected with. He’ll be playing music as long as he’s alive! It’s what makes him who he is. He was in a children’s choir and getting guitar lessons. All he wanted to do was play music, he thought he was called to do it. His mother and father sang Gospel. They were “Street Ministers”. They would go out in high crime areas, set up P.A speakers and preach the word and sing. They held “sing ins”, that’s what he grew up around.

His favourite blues artist is Michael Burks. He also listened to Gil Scott Heron for the R&B angle and gospel wise was influenced by the Clark Sisters. The Aquarium Rescue Unit was his favourite band, they are jazz fusion, so all a great mix of musical influencers. Shawn Lane was his favourite guitarist. His tastes are quite underground.” You haven’t heard me say, Stevie Ray Vaughan or Jimi Hendrix, I’m a bit weird that way, I like Sean Costello who died way too young”.

He used to go to go to blues jams when he first started playing the blues. “I was lucky having Kenny Neal walking in and Lil Ray Neal when he was playing with Little Milton. The Neal family was a huge influence. Larry Garner was touring Europe, everybody wanted that gig. I got to play with Luther Kent and all those mafiosi type guys! I was the young kid who learning and wanting to get some of that seasoning sprinkled on me! I wanted to sit in the groove and soak in the experiences. It’s what you don’t do that you learn from. I’ve played fifteen shows with BB King, played with Jimmie Vaughan, ZZ Top, loved it all”.
“If you don’t love playing, you’re doing it for the wrong reasons. You have to keep that love and passion if not you fall into the wayside”.

Samantha Fish and Jonathon had the same Manager, he thought it would be a good thing for them to work together. They had done shows together. They appreciated each other’s music. They enjoy working and touring together. “Samantha is good at not overdoing the production. You can do anything live, ten-minute solos. But in the studio, you need a clean solid version of the song that is understandable, the solo makes sense with the song, it’s not overdone or overplayed. She’s learned a lot of how to capture a quality clean version of the song for the modern listener”.

He’s put a lot of work into the new album, Parables Of A Southern Man.” Overall it’s supposed to make you think and weave a positive message”. Jenny the last song is about a guy in prison on a life sentence and takes an overdose. Jonathon says, I don’t advocate that in any way, it’s not my goal. It was from a poem my roommate did “Fetch my pills from the bedside for me to lay down to rest”. The 1800s vibe of that line is how he explains it is what provoked him to write the song. “It’s more about feeling old time to him. It’s from the perspective of being an outlaw, it makes you think!”. Madison Square Gardens is a song of positivity about changing the world! He fine tunes songs via using his phone for a memo pad. The idea to writing Savior’s Face was his Manager saying, if Jesus walked into a church, they would not recognise him, he would not be bearded white, long haired, he would be more Middle Eastern. He’s been shunned in the past by people who don’t make their religious standards, it’s a cathartic song. When he started playing the blues in Night Clubs that church got rid of him. They didn’t want him on stage with them on a Sunday anymore.” Landline is pure R&B with a bop in the melody. My Kind Of Crazy is similar. Dangerous and The Ride have a more rock edge to them. The Ride has a Metal riff to it”. He likes being in that musical gumbo where you can serve music to vast audiences. “The way music is sold these days; you don’t have to like a whole album. When it was tapes and records you had to listen to the whole thing and rewind. Now you just buy the ones you like! It’s okay to not know which shelf to put your record on these days”.

As to the blues in general, “I grew up around some of the best blues players in Baton Rouge, but that doesn’t mean I just listened to that genre only! “. He writes in many styles. He doesn’t listen to mainstream radio because a lot of the music is soulless, he can’t connect with this.” I don’t connect with sex sells America, if that makes sense, I guess I’m old school! Blues and Gospel have been rooted in just about everything. Without the music of African Americans, I wouldn’t be the man I am today”.

We chatted about venues, his favourite is the Forum Auditorium in Harrisburg Pennsylvania, he played with BB King there. His favourite Festival is New Orleans Jazz Fest because it feels like home and it’s an honour to play there. He enjoys performing, he was born to entertain.

Audience wise he feels he is reaching a lot younger people. I play billiards as a hobby and a lot of my friends they listen to mainstream radio but love my records. A lot of people say I didn’t know I liked blues, but I like your blues! The only way we can compete with the garbage music they are feeding kids these days is to find more creative ways to serve it. Broadening the genre of contemporary blues is going to help bring a lot more people into blues.

Regarding touring he recalls his first show with BB King. We were told BB shares backline with nobody. We set up and BB King introduces me to the crowd and leans back and says “Boy, you sure can play that guitar and I stole some of your licks. I said that’s okay I stole all of your licks! The next night, they tell us, all you need is your guitar amp, they knew we played clean. We didn’t need the trailer for weeks after! He was the sweetest person, I said I wanted to carry the torch of the blues, do I get your blessing. He said “Absolutely, I love the way you play, you have my blessing to play the blues for the rest of your life”.

Success to him is having a roof over his head paid for from doing what he loves to do. He’s his own boss! Also, he is a humble person who tries to give love and positive energy through music. He just tries to be true to himself. Accolades are important like being inducted to the Louisiana Hall Of Fame, “It means I have not wasted all my time playing guitar in my room and learning the national scale!

As to the future, he is promoting the record. Also, he is back playing Festivals. “People are ready to hear music!”. He just wants to bring love to the world through his music. He certainly has a positive attitude in these uncertain days for musicians, it was a very cathartic chat!