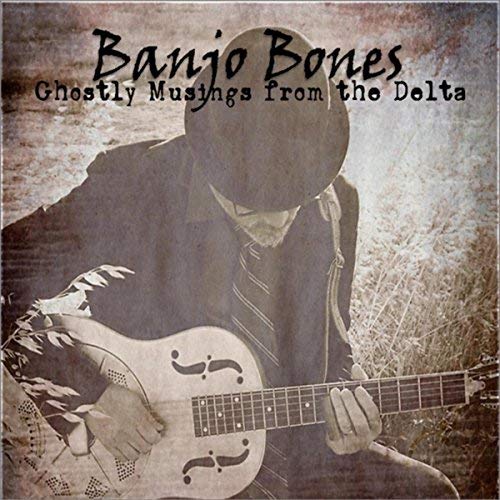 Album Review for Banjo Bones – Ghostly Musings From The Delta.

Banjo Bones is described as an exponent of “Americana” which in essence is an amalgam of Gospel, Folk, Rhythm & Blues, Rock & Roll, Country and Blues itself.

That is an awful lot to live up to and at the same time produce the goods for the paying public, fortunately, Bones does and consummately. The opening introduction is a short but superb example of the Resophonic guitar thus setting the tone for the rest of the album.

Track three “Rabbit Hole” is much more than the title suggests and is fairly lyrically profound and allied to simple but extremely dexterous finger work on the slide guitar licks makes the track a real diamond.  There is something faintly dark about the lyrics Bones uses but that should not put you off the album rather it should prompt some thought in the listener.

I particularly liked track five; “The Sermon” with the almost gypsy-themed violin support to Banjo by Giorgi Khokhobashvili, whose name alone hints at Georgian ancestry, as the lyrics and music were darkly haunting.

The very next track “Snowy Mountain Revisited” has choral support from Annie Eldorado and it surely adds lustre to Bones’ almost gravelly tones.

Overall, I have to admit to falling under his spell with the quality and musical ability of the whole package in these ghostly musings.

This is in part a philosophical script in music and so much more than the usual tripe you get waddling through the charts. This will never be one of those, but it says more about the lack of insight in the compilers of the charts.