ALLEN FINNEY – In A Blue Frame 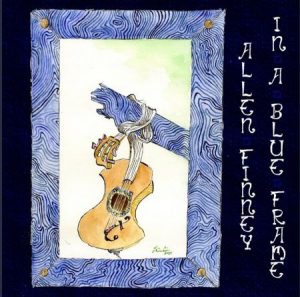 Allen Finney may not be a name in the blues that jars any immediate recollections, however, he is a staple and living legend in Sweden. An American ex-pat originally from Michigan, he’s been living and a part of the Scandinavian Blues tapestry for 40 years in Stockholm.

I’ve known Allen personally for 30 of those years and remarkably he is 75 years old, but just as active, inspired and inspirational as he’s ever been. A great picker, exceptional harp player, and distinct singer, but what truly pulls the whole thing together are his original songs.

His poetry in the blues, rags, country-tinged tunes, create stories you want to be a part of, like a good novel or a classic film. Allen Finney has released countless albums over the course of his career, however In A Blue Frame feels like the culmination of a man’s artistry, mastery and life’s work. Produced brilliantly by Robert Ivansson (as well as his prior release; Salt Breeze with Kites), what we hear is a command of great support players that simply serve the songs Allen serves up to us.

His guitar, voice and harp always in the centre. Felicia Nielsen guests on vocals on the track My Old Shoes, an old-timey ballad that just makes you want to hug yourself.

There is a wide selection of influences and styles here, but Allen’s gruff, sometimes dead-pan, personal and very present voice thread them all together. My personal favourite is A Guy Named Sly. It’s a lazy day, tongue and cheek blues that epitomizes Allen’s dry sense of humour and how he communicates this wit beautifully within the blues.

There are plenty of stand out tracks here but I recommend you just take In A Blue Frame in as a whole, and listen to this gem of an album by an unsung hero of the blues, creating a lifetime of music on the planet earth, where his stories are captivating, valid and need to be heard!