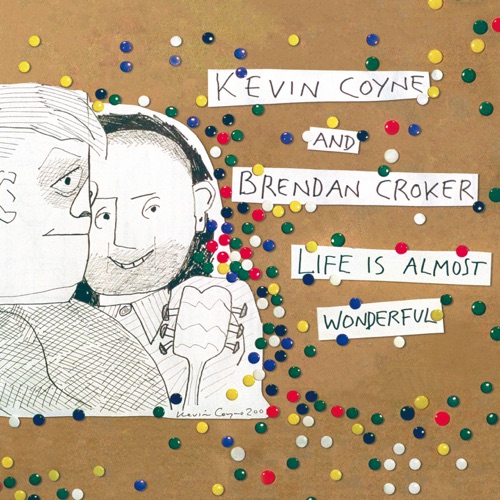 Those of a certain age and a penchant for nostalgia will remember the somewhat quirky, poetic songs delivered by Kevin Coyne, an English musician, singer, composer, filmmaker, and a writer of lyrics, stories, and poems. He was a John Peel favourite and did several sessions for the much-missed DJ. Brendan Croker is also in possession of an impressive CV. He’s played guitar with some of the greats, such as Chet Atkins, and he was a much-valued member of Mark Knopfler’ s ‘other’ band, The Notting Hillbillies.

The German CD and bonus DVD set is, to say the least, an odd kettle of fish. It was recorded live in Belgium in November 2002. If you are hanging on to your musical expectations and hoping for a dash of blues, Croker’s your man. His on-cue guitar complements Coyne’s often wild, semi-spoken lyrics. Let Me Be Your Sugar Daddy is a fine blues performance, as is The Eisenhower Churchill Blues.

There are some strange, melancholy offerings, too, such as Searching for a Friend and I know who you are, and a very peculiar high-speed monologue, Old King Cole. This is an album you need to listen to a few times before you get the hang of this unusual combination of characters.

It is blues, yes, and Croker’s guitar is always thrilling. Coyne (who died aged 60 in 2004) fits into that fluorescent bracket of performer poets such as Mark E Smith of The Fall or even early Tom Waits. As a souvenir of a creative partnership this record, accompanied by a remarkable live DVD, is as good as it gets. We need more Kevin Coynes today to make us smile, sit up and scratch our heads.