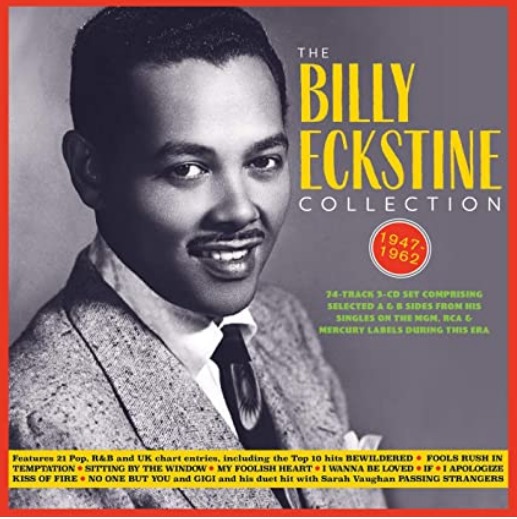 Billy Eckstine started out as a trumpeter and then became a big band leader in the early 1940’s. He later took the step of going on a solo career and this collection of seventy-four songs on three CD’s is the latest delve into the archives. He was a crooner of his day and amassed a lot of hits on major labels, MGM, RCA, and Mercury.

His top ten UK hits are here, including his duet with Sarah Vaughan on Passing Strangers and Alexander’s Ragtime Band. The collection has a well-illustrated booklet written by Paul Watts revealing his back story in full detail. He was certainly an influence on such luminaries as Lou Rawls and even Prince. His vocals were of a velvety baritone style.

“The orchestration is exquisite”

Songs like, Bewildered have a magic of their own. Likewise, Gigi, My Foolish Heart, and the evergreen, Fools Rush In are just classics. The orchestration is exquisite and professional, especially on Someone To Watch Over Me. He was self-taught and had no vocal training, hard to imagine listening here. January 1951 saw the release of a song called, I Left My Hat In Haiti recorded with Woody Herman’s orchestra compounding the complexity of his character.

Another gem is the Quincy Jones produced theme tune to the film Exodus. This is certainly a glimpse into a major part of his career. Soulful ballads galore, early rhythm and blues here as well, will keep his legacy going.