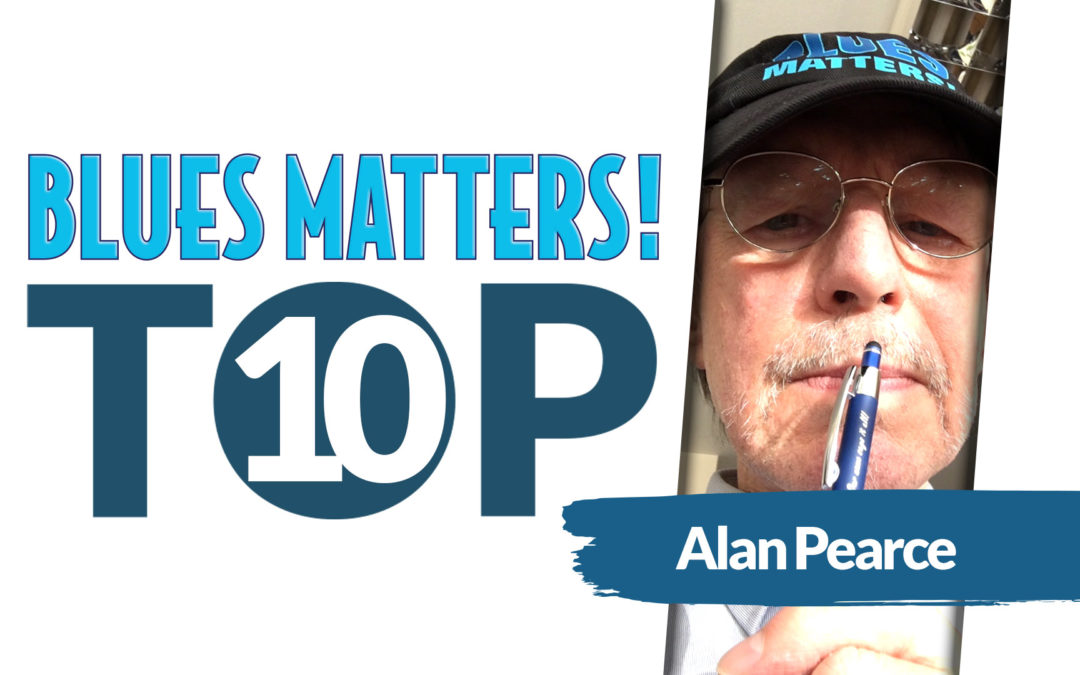 Our Editor-In-Chief Alan Pearce has shared with us his Top 10 favourites blues tracks although he did admit that like everyone else it was so hard to choose just 10. He says this list is in no particular order but hopes you enjoy listening.

From The Blues Keep Me Hanging On album. Nathaniel Peterson, bass and vocal and Tom Compton on drums and of course Kim Simmonds on guitars. Superb guests on the album included Duke Robilliard, Dave Maxwell, Paul Oscher, Leo Lyons and Roger Earl. This is a smooth, understated, deep song with super guitar, easy yet complex never overdone and was fantastic to see live. Nathaniel is a big man, (he often sleeps on the floor when the bed is not big enough) ex-US para, he’s a really nice guy to meet, his voice is something else. I was on the road with the band when the album came out and at The Worcester Park in Wandsworth and I had arranged for some ex-Savoyians to make a surprise appearance for Kim and had gathered Bob Hall, Bob Brunning and John O’Leary who watched the show and toward the end moved forward for Kim to see them. He was certainly surprised and he had them up to jam at the end. Nathaniel gave over bass to Bob B but sang on. Earlier Nathaniel had given a great Bad Shape and I heard fans around me talking and saying “if you shut your eyes you would swear to God that it was Howlin’ Wolf himself up there!”

A huge song, covered by so many others including Mike Harrison formerly of Spooky Tooth, Art and The V.I.P.s who were approached to be backing band for a chap named Jimi Hendrix by Chas Chandler at a London Club (name escapes me). His version on a solo album titled Smokestack Lightenin’ (on Island), Manfred Mann, Fiona Boyes, Crystal Shawanda, Mick Clarke, The Electric Prunes, Grateful Dead, John Hammond, The Animals, Maxwell Street Jimmy, George Thorogood, Blues Band, Jimmy Rogers, Etta James, and so many more…The man Chester Burnett was a physical monument of a man indeed with a presence that could not be ignored. His effect on the Blues world is of legend, his writing, his inspiration and his individual voice are there for us all to enjoy and there should be a mountain range with him and a few others carved into it like the US presidents are. Just a magnificent song from a magnificent man.

From their second album Blues Obituary. Of course also legendary for its’ performance by its’ creator C. Burnett aka Howlin’ Wolf who comes top of my artist list. Loved the album Blues Obituary from the off, it was a big step forward from Scratchin’ The Surface and their use of stereo imagery and sound shifting for aural enjoyment. The song has been covered so many times proving its’ a vital Blues number. I swear back in the late 60’s I went (underage again) to the L.S.E. in London specifically to see Spooky Tooth and also on the bill were The Liverpool Scene and in the corner of the hall/gym was this huge guy wearing a fringed jacket with three others backing him which I gathered was The Groundhogs yet they did not play from the stage that the other two acts were on. Hell, they were putting it out there though. I did not realise who I had witnessed right away but was hooked on him and on the sound of the guitar player. Later discovering he created his own tuning which stood out. Tony McPhee played with so many other artists from the UK and USA and was often the backing player of choice to touring US acts. Check him out also with Tramp and Jo-Ann Kelly as well as Blue Horizon albums with Champion Jack Dupree and Billy Boy Arnold – magic albums! I was over the moon when I met him and talked about his early acoustic work being a favoured period of mine and found he had written songs but had not found a label who wanted his acoustic work, they wanted ‘Hogs, so we talked about it over a period and I released Blues At Ten, a totally acoustic blues album.

(1968) Also recorded by F. Mac, Gary Moore, Henrik Freischlader, Will Wilde, and Steve Freund amongst others. Real name Anthony Bennett was born in Welshpool, Wales before moving to Kingston Upon Thames where he went to Kingston Art School that produced so many now-legendary names. He wrote this ‘classic’ when he was 22 years old. He could so easily have been sat on a Delta porch playing this, so authentic and haunting a song. Starting out solo with a foot peddle drum, guitar and harmonica rack he sadly met his end so early on his way home from a gig with Memphis Slim. Again do check out the 2006 release, Complete Blue Horizon Sessions.

From his Hell Or High Water album. The Atlanta born bluesman released the album in 2002 and amongst some blistering playing on the twelve-track carried this magnificent eight-minute piece of vocal angst and amazing guitar work. Hard to believe he has been recording for over thirty years already and constantly with quality and strong, raw and creative material. This track stands out for me with the emotional strain of the guitar tone as well as the pain in the lyric.

From Alvin’s album, Nineteen Ninety-Four released in 1994! Born Graham Barnes in 1944 he began playing at the age of thirteen and went on to become an International guitar legend and one of the ‘heroes’ of Woodstock, and the name Ten Years After, lives on today. This song is my total favourite piece of work by Alvin and features George Harrison on the slide, it is a gorgeous masterpiece. It was only after hearing the track that I found out the slide was by George and although I realised they were good friends I had not known that it was George on the track, one of his best pieces too! A truly beautiful song, mournful, smooth and even soothing and seemingly rarely covered.

When you want a song to hit you and relieve you of something this is one that performs that function for me, of course, played at high volume. The guitar intro and the tone is beautiful, the literal seductive calm before the epic storm, so easy and building the lyrical story behind it as the feel is deepened and builds. Jon tried the Blues his way and sadly I witnessed a good number walk out of a venue as he was getting into what was a fantastic set (too many years ago). This song alone shoulda showed them folk what they missed out on. This is quality.

The narrative Jack gives this song is absorbing and humorous you WILL laugh when you hear him talk about ‘that feeling’. Here is just one, of so many terrific pieces by Mr Dupree who indeed was a ‘champion’ of the Blues. This one is from the Complete Blue Horizon, sessions. I love the session he did with Tony McPhee on guitar in 1967 all the songs are different to The Complete Sessions, again, under Blue Horizon as well and simply called Dupree & McPhee. He was such a character and performer, oh and he did like his bourbon too, we have at least that in common.

I have always liked this song of agony and sometimes claim it as ‘my song’ when she (wife) doesn’t get me. This version is a live one from a modest Blue Wave label release and had been recorded live as part of a film based loosely on the life of Eric Burden in 1981 which only made a few film festivals and limited cinema viewings, then a modest VHS run. That Blue Wave finally released the songs in 1992 it was a joy for Eric’s fans. This version he plays with; lovely slow piano intro builds, and we even get a reggae section, just a joy because it is so different. Don’t Let Me Be Misunderstood was written by Bennie Benjamin, Horace Ott and Sol Marcus for the singer and pianist Nina Simone, who first recorded it in 1964. Little could they have known it would be revised by so many in so many different styles including; of course: The Animals, Little Bob Story, The Roosters, Joe Cocker, Tangerine Peel, Lou Rawls, Robben Ford, Poppa Chubby, Cyndi Lauper, John Legend, Bettye Lavette, Elvis Costello, Mick Hucknell, Jamie Cullum and of course many, many more. Another of my favourite versions was Gary Moore. I had a triple vinyl album import recorded in Japan which carried a live sixteen-minute version but some bugger nicked it from my flat (along with the rent money) and I have not been able to find that version again. (If any Gary fans know of it do let me know please)

Written in 1956 by Jalacy ‘Screamin’’ Jay Hawkins. A song that is in the Rock‘n‘Roll Hall Of Fame Top 500 songs. This version by Arthur Brown is yet another interpretation of this magical song where so many artists have been able to lend their own character to it. And by ‘The God Of Hellfire’ Arthur certainly does that! His so wide-ranging voice and the organ/Hammond of Vincent Crane simply rip into the song and make it stand out for me. I remember as an under-age lad of about fourteen, and the teenage daughter of a family friend we were visiting took me to a club in Bath that had recovered from being flooded (we could still see the tide mark) and Arthur Brown was one of the first acts to play there on re-opening. The stage was a raised platform you could walk under which was weird to this youngster who had never been in a place like that. He sure was an eye-opener! This was prior to Fire getting into the charts worldwide. The eponymous album was also a worldwide hit and I still have the track release as well as the Cd with bonus songs.

Others to have worked this amazing song include, Jeff Beck & Joss Stone, Bette Midler, Alan Price, Them, Chaka Khan, Creedence Clearwater Revival and of course Nina Simone to name just a varied few!