A Conversation with KEB MO 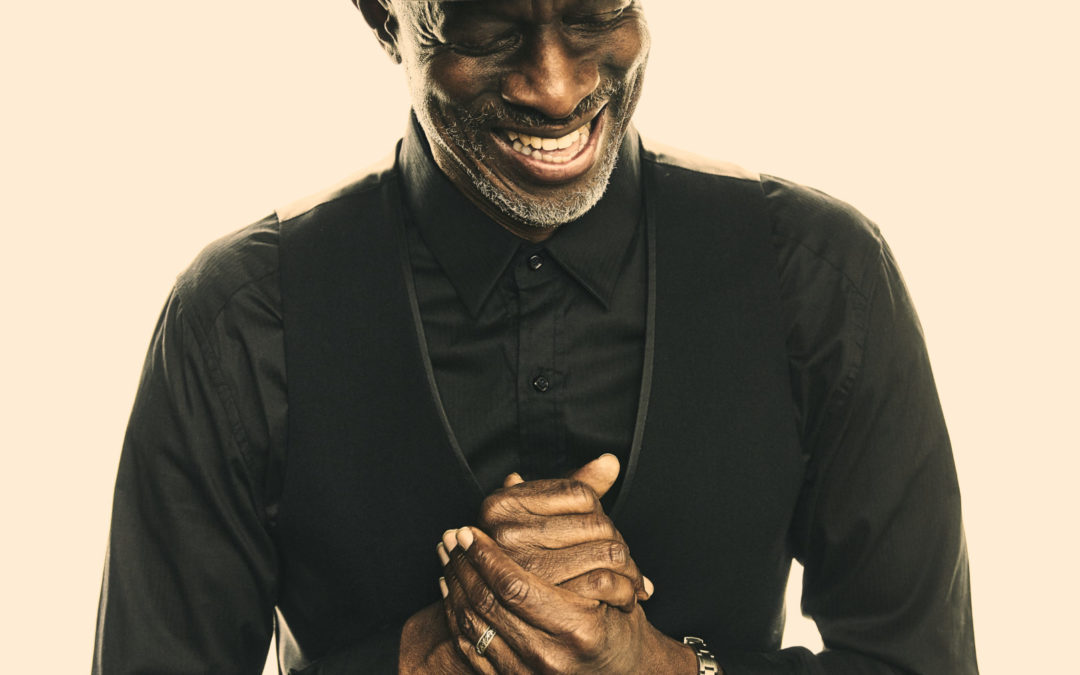 An interview with Kevin Moore, better known in the music world as Keb Mo. He has been recording now for over twenty-five years and is not planning to stop at any time soon. With his very distinctive guitar style and charismatic persona, his music is often personal and easy to connect to. This seems partly why he has had so many awards and is sought after by many fellow musicians as the go-to man to play with.

So, another year, and another Grammy Award, this time it’s for Best Americana Album for Oklahoma. Yet it’s difficult to categorise his music.

Hi Keb, thanks for chatting to Blues Matters magazine, much appreciated, where are you today?
Nashville, Tennessee, at home with a cup of Espresso coffee. It’s rainy and grey and there’s even some snow, I’m cosy, it’s a good day to stay in with a hot cup of coffee and work.

You’re not long back from Mahindra Blues Festival in Mumbai, what was that like, there was a great bill of blues talent?
That’s a great experience. We did a show with Kenny Wayne Shepherd. Next night, one with Buddy Guy! It’s a cool festival, Mumbai is a very different mindset, beautiful chaos I would call it!

You never seem to stop touring; you must like being on the road, what helps keep you focussed on playing live venues?
Well. It’s my job! It’s my destiny in life it’s what I do. It’s my deal so I do it. If I was doing something else I’d be looking for a break. The best thing now when I’m on my break, is I’m at home. Being home is important. I do errands at home. Like today I’m getting my ears cleaned out! At home, I can clean my teeth, fix my car; mundane things that you do when you’re not on the road.

Festivals or intimate small venues, what would be your choice or is there no difference in the atmosphere?
I think anywhere you play is an intimate venue if you know how to make it one, it’s about connecting. When the venue is small, that’s like a tactile thing. One of my favourites is The Hollywood Bowl; Etta James could turn that place into a hundred seat Night Club.

I saw you recently play Big Burns Supper in Dumfries, and you could hear a pin drop during some of the acoustic songs, how do you manage to get the balance right?
The sound guy, haha! When you’re playing to a larger group of people you need a good team behind you. The guy behind the desk is translating what you are doing intimately, he has to get it and understand it.

You’re playing Cheltenham Jazz Festival in the UK on May 9th this year, how do you choose the venues you play and does it fit in with your musical style to play at a Jazz Festival?
I would love to choose my own venues; I would play Wembley, Dodgers Stadium. Unfortunately in my line of work I have to take what I can get!! Maybe in my deeper conscience, I am choosing the venues I play. I am constantly choosing the best things for me at that time

On that, to people who don’t know, how would you describe your own musical style?
I don’t. Go to Apple Music or Spotify and people can make up their own minds. If I describe it I might say something wrong. There is nothing like experiencing the real thing. If you don’t like it don’t tell me what you think! It’s a deeply spiritual question. We try and provoke thought and connection with our music.

Congratulations on getting a Grammy for your Oklahoma album, what does this mean for you as a performing artist?
Thanks, I was shocked and honoured by this. This Grammy was for a different category, Americana. It awards a creative feel. It’s more for where I’m at and it means a lot to me. What it means to other people I don’t really know. To me it’s encouraging and uplifting, but not in a look how special I am, way! It means, how can I be more effective? it gives you the privilege to reach out to people. 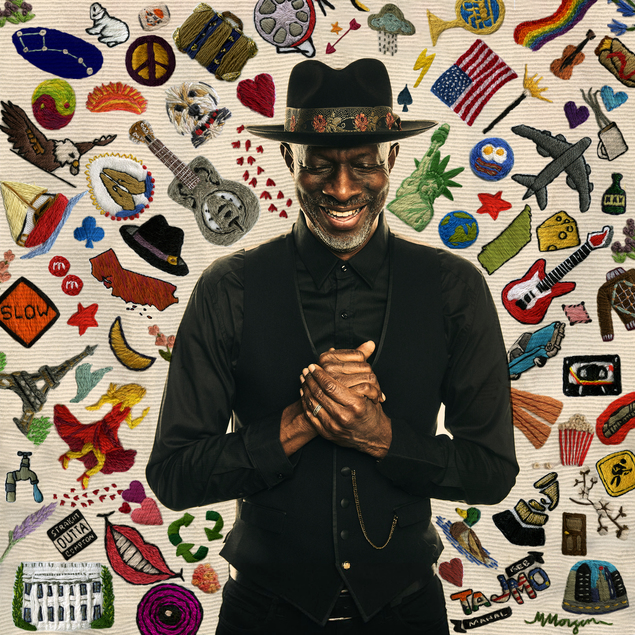 Talk about the album Oklahoma, the production and theme running through it, thinking in particular, songs like, “Put A Woman In Charge“ sung with Roseanne Cash, and “This Is My Home”.
There’s a theme running through it that was not intentional. It related to when the songs were written. There’s no real theme as such. When you listen to songs made in the ’20s and ’30s and every other decade there is a feeling to that music. When you say the ’80s, it’s oh yeh Cyndi Lauper. 2019, throughout America, had a feeling to it! We had a President who was not much fun. No disrespect to him, it created a subject matter. The environment was a factor on, “Don’t Throw It Away”, respect the environment, also other cultures and our neighbours from any country seeking refuge for a better life. It’s about all that stuff.

Any criteria for inviting guests to play with you?
Yeh, whoever shows up! It’s very organic. With, Put A Woman In Charge, a friend of mine suggested Roseanne Cash, and I thought that was perfect! She agreed to do the song and it was lovely.  Robert Randolph was here on a project, also Taj Mahal, so they joined in too.

What would you say is your songwriting technique, does the tune come first, the lyrics or can it be anything?
The song has to have a job firstly. I think, what’s the job of this song? When I write a song it becomes a living entity itself. It has the subject matter, it has a life to it you know. When you’re putting the lyrics and the melody in, you’re breathing life into some sound. That sound can live on for many years depending on how good that song is doing its job.

Your lyrics are very emotional and poetic at times; as on the song “Just Like You”, can you describe just how that feels to you when you’re singing it to an audience?
I go back to when it was written. It’s clear that moment never goes away. All these songs are written about a clear moment. The memory lives in the song, I draw on that and I go back to the beginning of why it was written and sing it with that intention.

You brought out a Christmas album, “Moonlight, Mistletoe & You”, how did this come about; have you always wanted to make a Christmas album?
No, but Christmas is the biggest holiday of the year. The season is so powerful. This album is a collection of songs that were around, some are covers. “One More Year With You” was written on January 2nd about eight years ago. The title song was not written during the Christmas season. It was written for a project that didn’t come to fruition. We were writing it for a movie. It was a country song about an imaginary country singer

“Christmas Is Annoying“ is a particular favourite of mine, care to talk about this?
Self-explanatory. Over here Christmas is annoying. The Christmas Season starts before Halloween, why not just start it in July!!

What’s the best advice musically you have been given in your career and by whom?
It was about songwriting. It was a conversation I overheard in a restaurant. Two songwriters were asking how you get someone else to record your song. They said, “You can’t write for that person, you just have to write a good song that means something to you, then that’s probably what will sell the song”.

What would your advice be to up and coming young musicians?
Be fearless!

If you were not playing music what do you think you would be doing?
First of all that ain’t going to happen! But I would be a gardener, I’d make the neighbourhood look better!

Is there anything about Keb Mo that your fans and readers do not know about and that you’d like to tell us?
I can’t tell you these things, I’d have to kill you! I’m a folky, at heart. I’m not very outgoing and I’m not lazy, but I love sitting around and doing nothing. There’s something I love about sitting with nothing on my mind. At the moment I’m watching the rain turn to snow as it is coming down that’s pretty cool.

What are your plans for the future?
Getting my ears cleaned out at 1.30 today! Going on tour, going to New Orleans, Europe, and working on a new album! This next record is going to be very interesting. I’m planning songs. I have to do something that excites me and intrigues me. I want to do something fresh, it’s a real challenge. The soundscape and the atmosphere is important when organising this.

You are always well dressed on stage, care to talk about this?
I think dressing well is important. Clothes are a language. By what you wear, you can communicate with people, through clothes. If you go to a black-tie affair in blue jeans and a t-shirt people will know you don’t give a shit! Grammys are open in dress code.

What other kinds of music do you listen to?
Not very much, old stuff, old blues, 60’s and 80’s R&B, Jacob Collier, Herbie Hancock. I listen to what’s popular at that time. You have to say what you do in a song with the least amount of lyrics as possible. I lead an ordinary life! People see you on stage and think you go partying and stuff but, I’m so boring and I like it like that. Being onstage is an enhanced version of who you are.

Sounds like your persona onstage is the same as offstage then?
Yeh, you have to be yourself, that’s what makes you, you. Trying to make something up never works!  A real friend is someone you can sit around with and not say anything. I have a lot of trust in who we are, and the way life plays itself out. It’s always right where you’re supposed to be. You have to be gracious! If you walk around being invisible, that can be just as torturous as being famous.

What’s the strangest place you’ve ever played?
They are all strange! There’s a place in California called The African Palace. A dive joint, they sold beer and wine. The only person who came in there was a cross-dressing man! He was quite pretty as a woman. That was a time when I played with Lowell Fulson, it was cool but he yelled at me all the time, I was young and stupid!

It really has been an honour talking to you.
You too, bye!