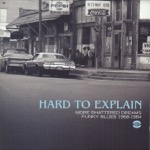 The first thing that is “Hard To Explain” in context, is that this disc is a collection of funky blues from a variety of artists. This is not a single or indeed even a couple of artists performing, it is though, a guide to funky music with a hint of blues throughout which is from the late sixties to early eighties. This is a form of music which never really hit the heights at the time, but which has a resonance now with the passing of time. This is another top value disc with no less than 20 tracks, most of which even the most avid of blues fans would struggle to remember, that said it does make it fresh in the sense that the individual tracks will be being heard for the first time. The dazzling finger work of Albert King on electric guitar through track 9 Cold Sweat is on par with BB King, and then Track 15, Getting’ Down with the Game was another superb exhibition of guitar playing by the curiously named Adolph Jacobs. This was swiftly followed by Jimmy McCracklin’s vocal contortions with I Finally Got You as track 16. McCracklin himself racked up no less than four gold records from his repertoire of thirty albums and is probably one of the foremost artists on this compendium of real funky blues. I’ve mentioned a few favourites above by personal preference! However, overall this is an example of real value for money and one for the collection.