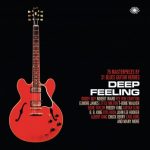 This triple album compilation has been put together by record producer and Blues discographer Neil Slaven. Fantastic Voyage had previously released a 3 CD Blues guitar anthology called Screaming And Crying, then followed that with Just Wailing, a harmonica release then a Blues Piano release called Midnight Steppers. Deep Feeling returns to the Blues guitar and its originators. The 75 tracks on offer by 31 guitar heroes spans a three decade period which I believe is the fifties through to the seventies. Artists chosen include the three Kings, Buddy Guy, T-Bone Walker, John Lee Hooker and Eddie Taylor as well as a host of lesser known artists. In fact, there are a number that do not even feature in the Guinness Who’s Who of the Blues, guitarists such as Morris Pejoe, Lee Jackson, Goree Carter, Jesse Allen amongst several others. One of the outstanding observations I made listening to the CD, was the way in which the music had to compete, both on a commercial level as well as in the clubs and juke joints in which these artists had to work. The odd bum note or flat vocal seems irrelevant in the wider sphere of the music, enhancing to some degree the authenticity the music. With 75 tracks to choose from, everyone will be able to find some familiarity, but I guess this will appeal mainly to those who both study and are connoisseurs of the Blues guitar.