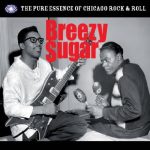 The borders between blues, soul, R&B and rock have always been blurred, but as blues fans, when we think of urban blues we usually think Chicago. But the Windy City, just as much as the Big Apple and Memphis was pumping out good old Rock’n’Roll every month back in the 50s and 60s, and these 75 tracks reveal just how invigorating it was – and still is. The Sugar CD series was a Stuart Coleman project, so there’s been Heavy Sugar, (New Orleans), Savvy Sugar (West Coast) and there’s similar compilations revealing musical nuggets from New York, West Texas, Nashville, etc. This tasty triple-decker has some of the big names, like Bo Diddley, Chuck Berry, Junior Wells, Eddie Cochran, Rick Nelson and The Coasters, but it’s the others, always the ones that got away, which make you sit up and listen. You get fine vocal groups like the invigorating Spaniels, El Dorados and The Flamingos and there’s stirring stuff by the late great Johnny Otis, Jimmy McCracklin and a host of others.

Unfortunately, the on-screen track running order on the discs I played failed to match the correct track numbers to the correct artists. That’s not so bad if you’re an old crust like this writer who knows his Dale Hawkins from his Priscilla Bowman, so I hope for accuracy’s sake that the version of this in the shops reaches you with the correct track/artist configuration. Even so, that aside, this is superb stuff and not to be missed.