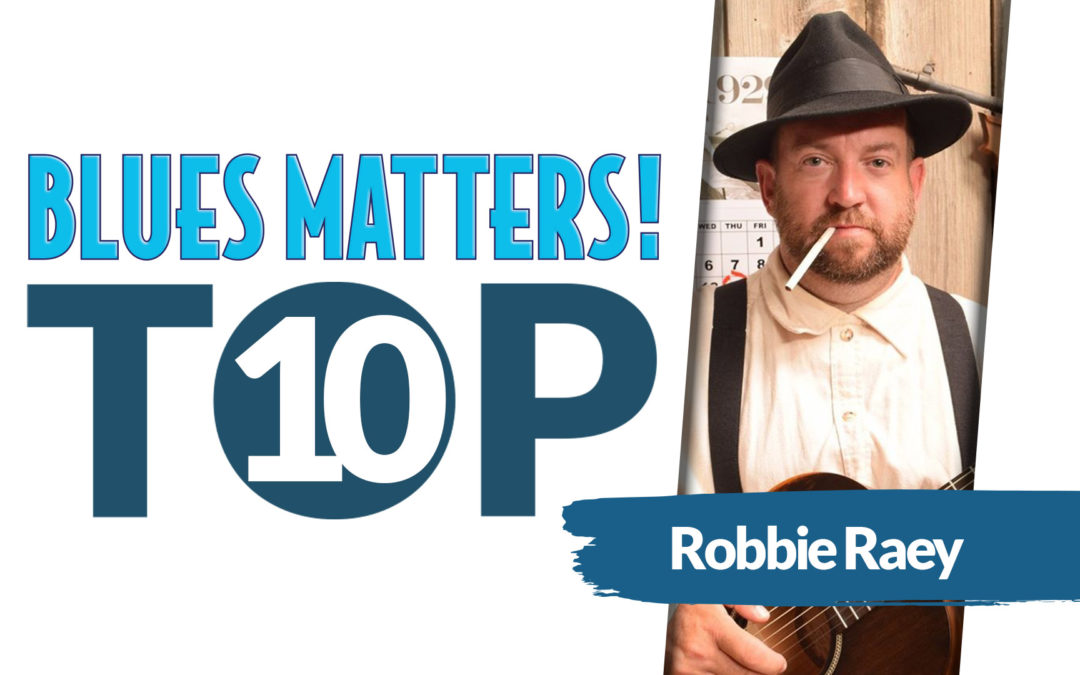 My name is Robbie Reay, I am a blues musician based in the Scottish Borders, originally from the North East of England. You may have seen me perform throughout the UK and overseas as a solo performer, as a duo with harp player Willie Cran, or with my band The Killer Cats.

This was an incredibly difficult task for me; because there are so many phenomenal blues songs and artists past and present, so trying to narrow, it down to just 10 tracks is not easy. The more I hear blues music, the more I want to hear. My only regret in life is that I should have found it sooner. Simply put, blues is life. You live it, you breathe it, its organic, real, its truth, love, longing and yearning all rolled into one with so much feeling and soul through it, it becomes you.

I write record and perform my own songs, which I class as contemporary blues because I wasn’t brought up in the early 1900s in Mississippi and don’t profess or pretend to be Robert Johnson or anyone else for that matter. What I do achieve is blues music with truth and feeling from real-life experiences in my life. Just as Steve Wold said, “you can’t write a song about red wine if you haven’t drunk red wine”.

To be true to the roots I had to visit the place where it all began to experience the delta, staying at the Hopson plantation and playing at many places along the way. Blues music has taught me more about life and opened up many more facets of life than anything else but has also put many things into perspective. Here are 10 of the blues songs that have inspired and influenced my journey so far, with a brief description.

Recorded in 1929 and is one of my favourites because it is a delta blues classic, combining vocal and slide-guitar. Like a lot of delta blues music, it is simple but very effective. The song is real; it has feeling soul and conviction. This song inspired many blues musicians including RLJ ‘If I had possession over judgement day’. Many other musicians, including modern blues bands, also covered this song. I believe it is a timeless classic.

It doesn’t get any more stripped back, raw and honest than this incredibly powerful song. This is a great song, which is as true to life now as it was back then. A tortured soul, once a preacher, then a bluesman, who has gone through hard times and struggled with humanity. Trance like in its feeling and projection, this is a genuinely inspiring song. For personal reasons, this is one of my all-time favourites and always will be.

There is a line in this song which harks back to the time when WC Handy heard a man playing slide guitar with a knife over the strings of a guitar singing “Goin’ where the southern cross’ the dog” in 1903 at Tutwiler Station. (Bessie Smith covered Handy’s song Yellow Dog Blues in 1925) Its delivery inspires me, with longing and yearning, this short song performed by Hayes has it all and tips the hat to where it all began.

This song reflects his delta blues roots probably one of the best-known and widely covered Robert Johnson songs, a blues standard. This fed fuel to the myth of selling one’s soul at the crossroads, without references to this in the song. Robert Leroy Johnson, an incredibly talented musician, a compendium of blues music, but also a tortured soul. The sheer brilliance of his guitar and virtuosic solo performances are an inspiration to me and guitarists worldwide.

5 – Got My Mojo Workin’- Muddy Waters

This song was written by a little-known blues musician named Preston Foster and was first released by the gospel singer Ann Cole in 1956. The song really took off when Muddy Waters released his version in 1957. This song includes elements of folk magic, hoodoo, practised by Afro Americans past and present. A great feel-good, sing-along song with a tremendous driving rhythm, which is what inspires me.

This is a great Chicago style blues version of an RLJ classic. Another superlative blues standard brought to life with that amazing riff which is tremendously inspiring. This song also has elements of the itinerant delta blues musicians lifestyle, getting out of town in a hurry.

This is an up-tempo blues song. It proves blues isn’t just about melancholic longing and yearning. It’s a feel-good song from the healer himself. One of the greatest inspirational guitar riffs encompassed by a 12 bar rhythm. Some of the wordless phrases have been used by the likes of ZZ Top. This is another blues standard covered by many including The Animals. John Lee Hooker inspired my rhythmic driving style and vocal embellishments.

Another, blues classic. A simply brilliant blues standard that is inspiring to me because it reflects the style of the country blues performers that influenced RLJ, including Son House and Charley Patton.

A brilliant blues standard, written by Willie Dixon. This is a Chicago blues version, which includes one of the most recognisable riffs of the blues. The song also had a major influence in popular music. This song inspired me both musically and lyrically because it has great riffs, folklore, hoodoo references, luck, fortune and gipsies. The song hints at jazz and is sexual too, just a brilliant song. What isn’t there to like?

“That’s the blues, that’s the Delta blues”, can’t say much more than that, simply wonderful. This is inspirational to me because Brown delivers the song in a country blues voice complimented by delta blues guitar playing. I think it could be the key to the older delta folk traditions that were never recorded, only passed down through generations, like a story of the past evolving in time. This song was popular and first recorded by Blind Lemmon Jefferson as “Broke and Hungry”.