ROB HERON AND THE TEA PAD ORCHESTRA Talk About The Weather

ROB HERON AND THE TEA PAD ORCHESTRA Talk About The Weather 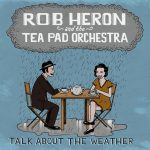 Let me start by saying this CD is not a straight blues CD. In fact, some of the songs lean towards jazz, and a couple even verge on vaudeville, but I don’t say that in a negative way. The opening track sets the tone for what’s to follow. A pleasant stroll through a series of cleverly written songs, with a lot of them putting a smile on my face. There’s even a hint of Summer Holiday in the melody of Hey Mr. Landlord. The subject matter is very modern (Junk On The Radio, and an anti HS2 song in High Speed Train), but the style is mainly rooted in the 1940’s. Small Town Blues has a country feel that extends to Rob Heron even adopting a bit of a yodel in parts. The band have been gathering a loyal following since their formation four years ago, and a series of UK and Irish tours. If you’ve not seen them, think of someone like King Pleasure and The Biscuit Boys, and you’ve got a good idea of what to expect. Good time music that you can drive along to, with the metaphorical top down.

The album is well produced, and the musicianship is a clear indication of experience gained. They’re about to hit the road, so keep an eye out for them at a festival near you.