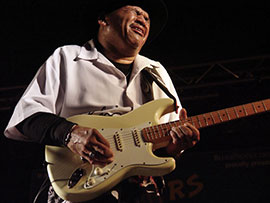 Born October 27, 1948, Breaux Bridge, Louisiana, United States) was an American blues guitarist, songwriter and singer, who has been described as “one part zydeco, one part swamp blues, one part electric blues and one part classic rhythm and blues”.

Sherman Robertson was considered a master of zydeco, hard-swinging Texas electric blues, R&B and swampy Louisiana blues. Robertson often surprises audiences with his ability to play R&B, zydeco and blues with a rock edge. “I use that driving, road-cooking type zydeco groove, and put blues on top of it,” says Robertson. It’s basically rhythm and feel.”

In June 2000, Robertson played at the Pioneer Valley Blues Festival in Massachusetts. Alligator president, Bruce Iglauer, was in the crowd. “He was always good,ï¿½ he says, “but when I saw him in June he was on fire. He ruled the stage, had the audience in the palm of his hand, and his just plain physical showmanship reminded me of Albert Collins. As Soon as he walked of the stage I started talking about signing him. He’s got that Texas energy, great guitar chops, and is a wonderful, soulful singer.”

Sherman was born in Beaux Bridge, Louisiana and raised in Houston, Texas. Robertson quickly earned a local reputation as a very good guitarist.   While still in high school Robertson was recruited by his music teacher, Conrad Johnson, to play in his popular group, Connie’s Combo (and otherwise adult band). As a teenager in the late 1960’s, he spent six weeks on the road as lead guitarist with blues superstar Bobby “Blue” Bland and also backed Junior Parker. That gave Sherman the incentive to form his own band,

Sherman Robertson and the Crosstown Blues Band with whom he recorded two albums on the Lunar II label. During the 1970’s, Robertson was content playing weekends while raising a family and holding down a “regular” job until Clifton Chenier, ” the King Of Zydeco,” asked him to do some dates with his band. Those few dates turned into 5 years, as Robertson toured Europe and U.S. with Chenier.  He then joined Terrance Simien’s hot, then young zydeco band, briefly playing with Rockin’ Dopsie, Johnny Clyde Copeland and several other well-known artists.

His second Atlantic release, Here And Now, was released in 1996 to more critical acclaim. But convinced he would have more promotional support and artistic freedom from an independent label, Robertson weighed his options. In early 1998, producer Joe Harley, with the help of Robertson’s manager, Catherine Bauer, assembled a first class back up band for a project for the AudioQuest label, including two charter members of Little Feat, keyboardist Bill Payne and drummer Richie Hayward.

They all gathered at Ocean Way Recording in Hollywood for the sessions that resorted in the album, Going Back Home. Blues Revue loved the release. ” Potent singing and sizzling guitarï¿½Robertson is unstoppable.”

Listen to the great Sherman Robertson on Youtube from the link below..