Redﬁsh to release live EP: ‘Songs from the Fire Station’ 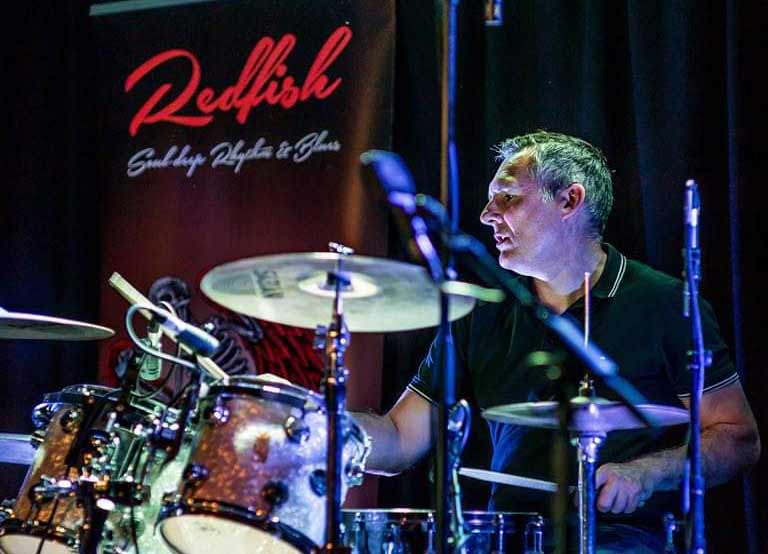 This four track EP explores four wildly diﬀerent aspects to their interpretations of the chosen styles, blending a funky, soul-inspired melting pot of what to expect at one of their live concerts.

If you have never seen Redfish before, this is as close as it gets to that amazing experience. Opening track is Meet Me In The Morning, a reinterpretation of the Bob Dylan song from his Blood On The Tracks album. Simply, this is rearranged with a stylish piano intro with underlying guitar, fan faring the vocals of Stumblin’ Harris. It has a really funky blues tone and exhibits all the musicians’ talents. Laid back tones, the listener definitely gets that live feel, then midway Fraser Clark goes into overdrive with a stunning piano solo. Later Martin McDonald solos on guitar and the party gets into full volume.

Hound Dog Taylor’s Give Me Back My Wig next. This is just fast paced rhythm and blues the Redfish way! The rhythm section of Rod MacKay on bass guitar and Sandy Sweetman on drums, really carry this tune to a different level. With Fraser Clark adding the keyboard cherry, just a stunning version. The band just ramps it up the longer the song goes on.

Jimmy Reed’s Bright Lights, Big City brings a Chicago vibe to proceedings. This song rolls on with such depth of feeling and emotion; you just can’t sit still to this one. Again a great arrangement showing what a tight band they are and enduring evidence of how good they are playing in a live situation. Vocals are clear and succinct, the delivery just right. 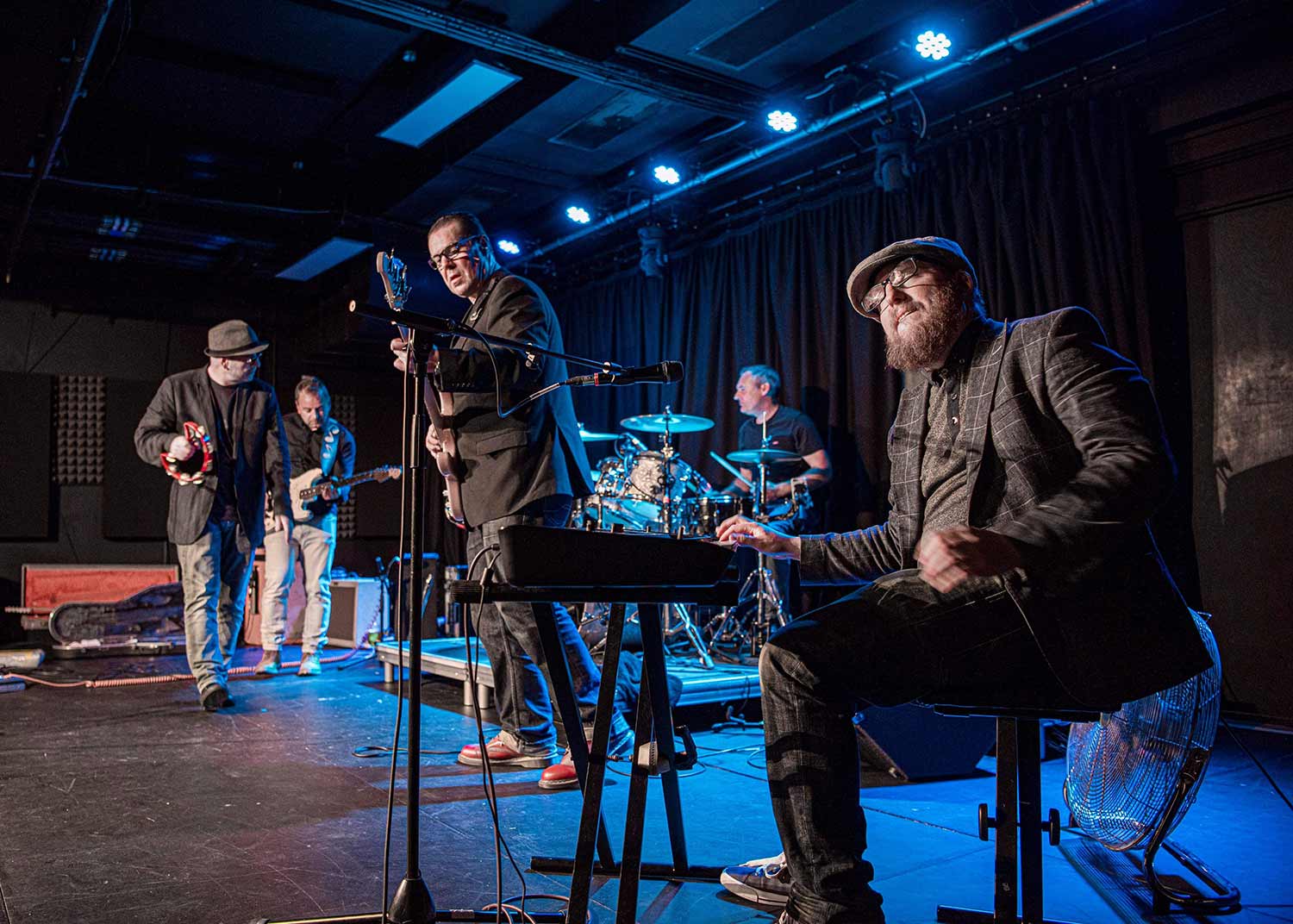 A firm favourite is the final track, an interpretation of Bill Withers’ Use Me. But there is a twist to this track straight away, it fuses Jimi Hendrix Voodoo Child and it works so well. So many layers to this tune, the band takes it to another level. Velvety soul vocals soar with the band and there’s a palpable hypnotic feel when they get into the groove, which overflows to the audience. This newest release is what live music is all about and has a real feel-good vibe, showing just how important live music is at all times, especially these days living through a pandemic.

The binding agent of the band is the rhythm section, with Rod Mackay on bass and Sandy Sweetman on drums. Lead vocalist, Stumblin’ Harris, just feels what he sings. They are joined by two world-class soloists and improvisers; Martin McDonald on guitar and Fraser Clark on keyboards. The band’s chemistry is the exciting part that makes the shows so unique. They are a true working unit and on these tracks, the sound is truly phenomenal.

But that’s not all, I also got a chance to chat with Bass man Rod MacKay. Here’s his take on all things Redfish and more… 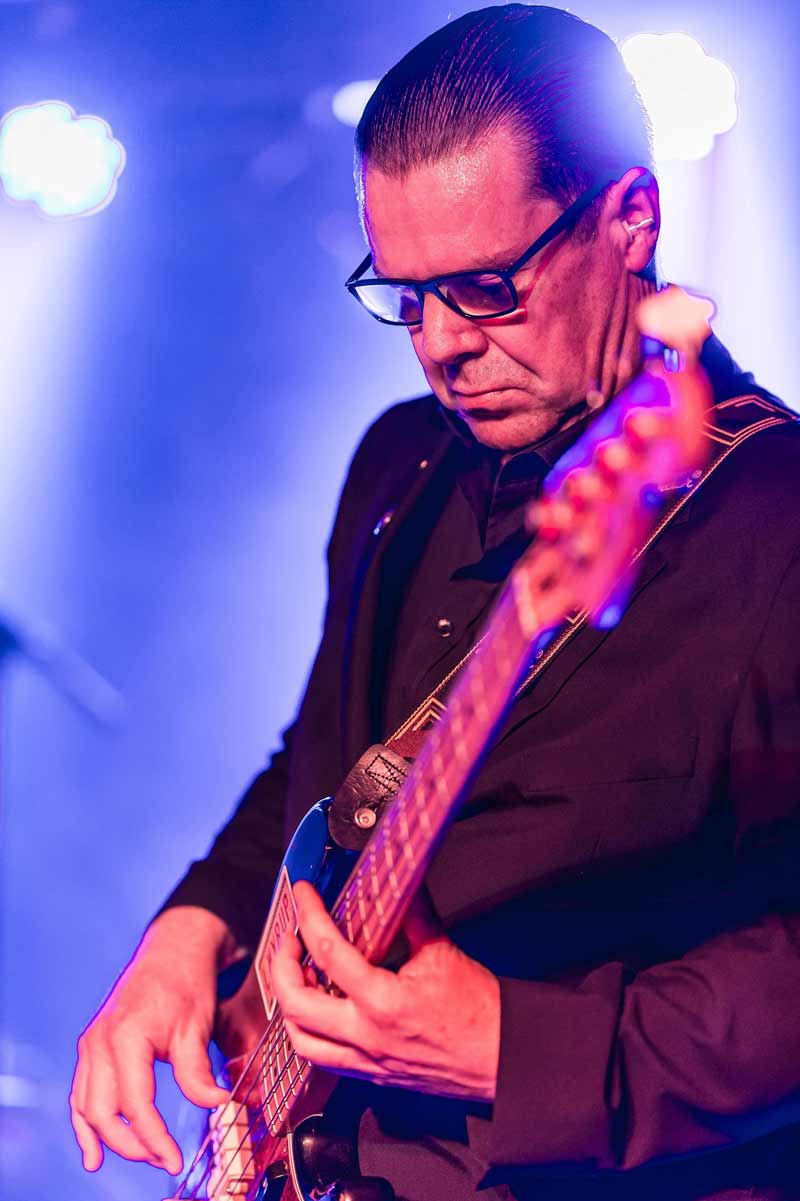 “We musicians are a bit temperamental and flaky anyway”

Hi Rod, thanks for chatting to Blues Matters how are things with you? How have you been handling this pandemic as an artist?

After last March when we talked at Dumfries Rock Rhythm and Blues Festival, it all started. There was an ominous feeling then and the next week we did an open jamming session at the Fire Station in Carlisle. The audience attendance had decreased. I anticipated this as a lot of the demographics of the audience is older. We said this is probably going to be the last time we see you for a bit. Maybe get back in the summer, so we thought! In my career in the Police, I was involved in contingency planning. Psychologically I tried to keep my pecker up and keep planning. My anxiety about all this was people will take their eye off the ball and give up. Music colleagues are depressed about all this and also there is a feeling that the Government is ignoring them. In Autumn I felt if we don’t plan for spring 2021there’s a chance of nothing happening then….We can’t deal on a calendar year basis as artists.as time went on, this has worn me down and a realization of lockdown life.  It was me and my wife at home and speaking to my son via Skype in Manchester. We do zoom meetings with the band now, that’s given us a lift. It’s all felt like going through the grieving process.

Yes Rod, but mostly these stages are all in the same day!

We musicians are a bit temperamental and flaky anyway. Keeping an even keel is hard at the best of times! Seriously I know a lot of people whose mental health have suffered. We assembled this collection of songs for the EP which is a positive thing to do, getting the artwork done; it’s getting radio airplay that’s brilliant. There’s an end in sight to my grieving process with this! Iain Donald, Adele Gavin and myself have plans of augmenting the duo they do now. We really can’t do live streams as a band although Sandy is very tech minded. We discussed it as a band. With Redfish it’s about how we interact as a band. We did some Lockdown Sundays but made a policy decision not to do this. Audiences enjoy seeing you’re not just sleepwalking through a performance, you’re engaged in the moment!

There will be a place for live streaming though, when bands do get out to play live?

Yes. One of the positives from these are people have improvised. It won’t and can’t replace live music, especially with our soul rock sector, it’s the live product that’s the essence of all this. An example is Iain and Adele’s live streams. We engage with some banter and create some virtual community there. It can mean to people who are isolated that they are not alone. Music is the connection. 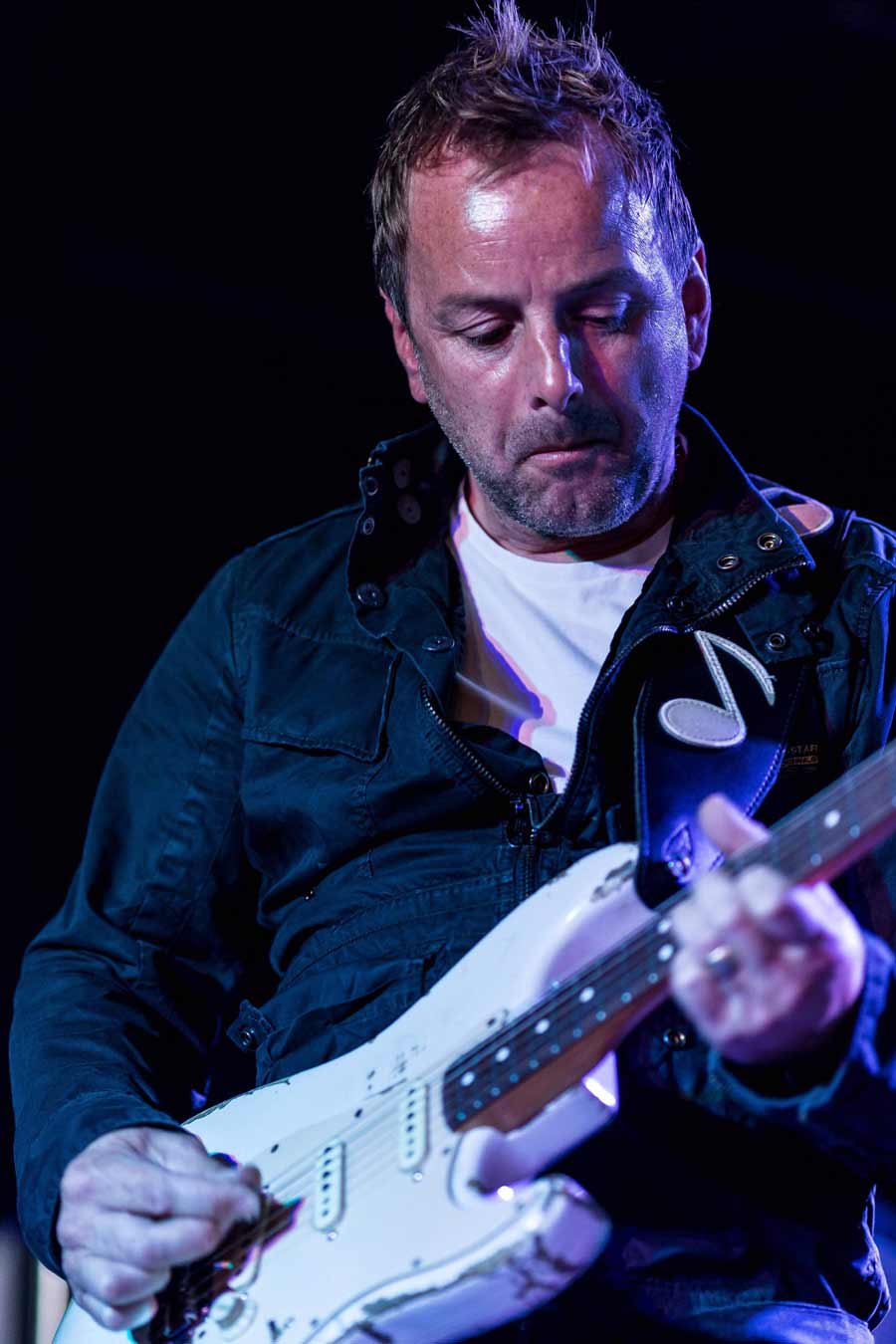 Talk about the other projects you have.

Played with the Blind Lemon Gators with Greig Taylor and Iain Donald. We managed to have a session playing in Glasgow with Iain and Dave Cantwell. We hired a facility and had a whale of a time jamming. Have cleaned my double bass and started playing that. I was playing my bass guitar recently and noted my left fingers were hurting. Used to play every day, I have a new bass guitar coming today as well! Checkerboard Lounge is another project I’m involved with. That’s a group led by Ethan Thomas who sings at the blues jams in Carlisle. He is a pupil of Martin McDonald Redfish guitarist! They do a duo around local pubs and I play bass with their bigger band sometimes. What is sad is I have a calendar on the wall. The reason being if I don’t the wife will make arrangements… Anyway had to score the dates off, Checkerboard Lounge being one of those.

Any plans for the future?

We have this release on Valentine’s day of the EP. A Stirling City Radio show as well on 11th. One of the best things is you choose your own music. It was fun going to the guys to share. There is a diverse range there; this reflects our music styles within the group.

How would you describe the music Redfish play?

Rooted in R&B and Jazz essentially, with poetic, Dylanesque lyrics associated with it. It’s soulful, influences of Otis Redding. We go out as a blues band but the community is like that. It goes from blues rock style to delta Blues. I love the Delta Blues, Elmore James style. The EP has a version of Hound Dog Taylor’s Give Me Back My Wig full of slide guitar. My choices include Chic; Niles Rogers was a huge influence on me playing guitar in my teens. Fraser Clark our keyboard player has his own jazz quartet. The album Souls has evidence of that broad range of styles. It all comes back to rhythm and blues.

What’s your own musical background?

My mother was a music teacher; we were always surrounded by music. She played radiograms, she played Glenn Miller records. She taught me piano, I also played clarinet seriously for a while. I bought my first bass guitar after my bike was stolen in Leith, my dad claimed on the insurance. Ian Barbour and I played R&B from when we were sixteen, he’s guested with Redfish. I listened to American disco music with a strong bass line. When I first listened to bass lines being performed in a rhythm section I felt this is what I want to do! When my son was in his teens I started playing again locally and so it goes on! Mrs MacKay is very understanding!

Who have been your influencers in your career?

Bernard Edwards and James Jamerson, regarding the bass guitar side. Motown and funk both fit the blues model. It provides the strong rhythmic pulse. Say you listen to Live At The Regal by BB King; the bass moves the music forward. The bass tutor I admired Jim Stinnett presently very unwell taught me a lot. It’s all in the plucking hand. Listening to the EP you’ll hear Sandy and me keeping the groove together. Charles Mingus and John McVie are also influences in my playing. We provide that platform for the soloists. Martin McDonald our guitarist gave me a great compliment, “I never hear you, it’s just there, you respond to the music”. When you start playing with other musicians that’s where you start learning! Christian Sharpe the guitarist is a great performer, he’s demanding! 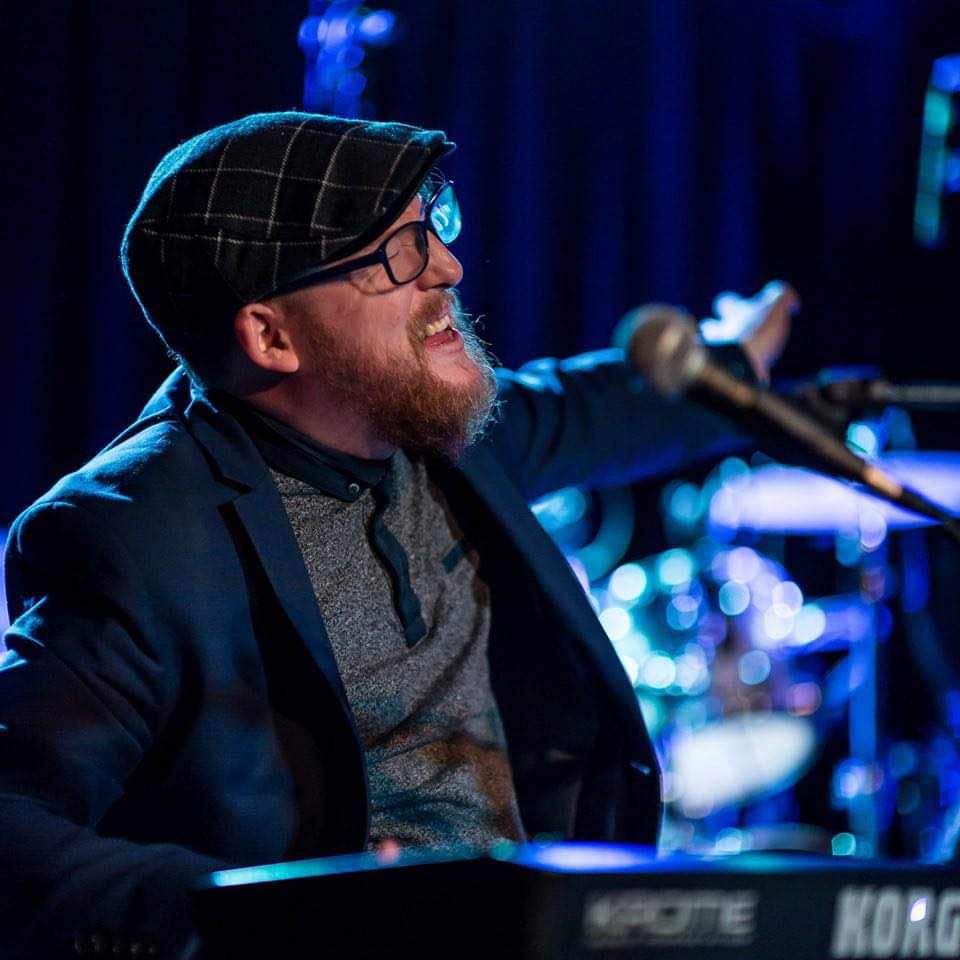 Yes you played with Christian Sharpe at Carlisle Blues Festival when you were in the Deluxe?

Playing with them was like going into battle! It was so intense. Always play with better players than yourself!

Talk about your role in The British Blues Federation.

It was Rosy Greer who contacted, she said you’re passionate about the music, a working musician and what you did with the Fire Station music jams with new talent, well it was an honour to be asked! We’ve been doing the British Blues Awards categories end of voting is soon! The ceremony may have to be a virtual one again. I’m keen on opening dialogue in the community. This makes things credible, and we’re all members. With membership it gives some privileges like voting. You and I are still in communication about putting the Blues Fuse on in Edinburgh this year, that’s another important thing.

Is there anything we don’t know about Redfish that you can share here?

Sandy played with one version of The Bay City Rollers, the Eric Faulkner one! Fraser Clark was almost a concert pianist. He said if you’re not one at ten then you never will be! My personal message to the blues community is there is hope and we’re on the home straight.

The EP can be pre-ordered through the bands’ Bandcamp store where merchandise and previous releases are: