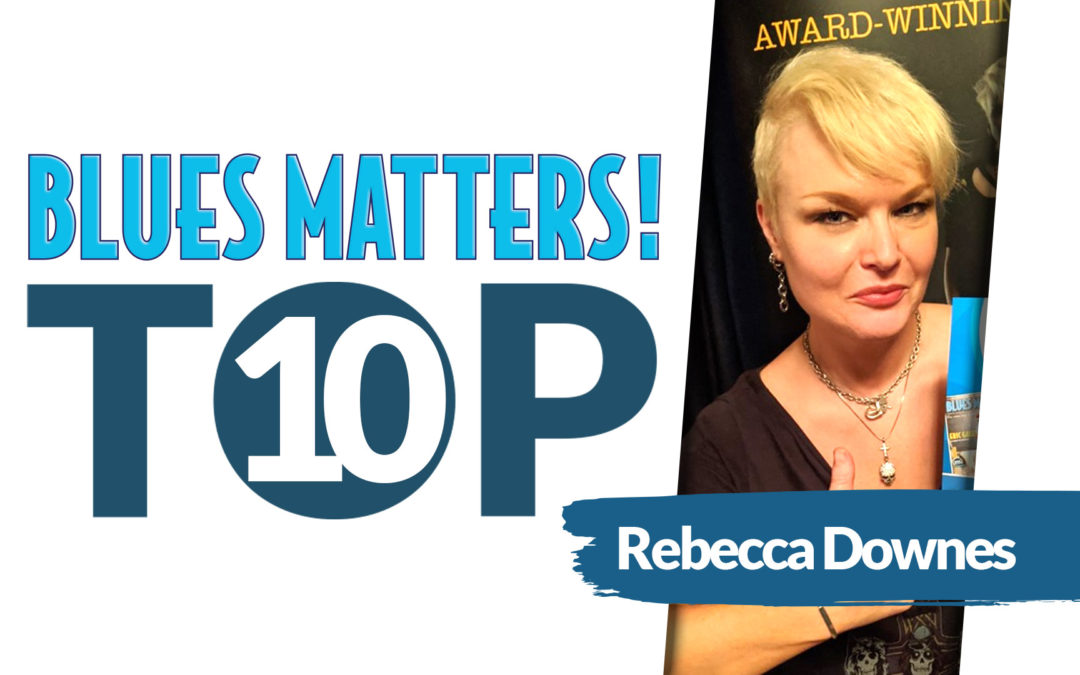 Birmingham, UK-based Rebecca Downes and her band are described as a ‘must-see’ live act that can often leave newcomers simply blown away by the sheer power of their performance.

Rebecca and her co-writer/guitarist Steve Birkett perform as part of a 5-piece outfit who play original rock/blues tracks from their EP Real Life, their highly-acclaimed debut album Back To The Start and their superb second album Believe, punctuated by one or two classic covers.

Whenever I am called upon to cite my musical inspirations, I often mention Etta James as someone who not only had an amazing voice but who also bridged the genres of blues and rock. I have performed several of her songs on many occasions. Everyone knows this as her signature song and not only do I admire the delivery of it, I can absolutely relate to the lyrics – that feeling of relief, happiness and sheer joy that ‘the one’ has arrived in your life. But I also feel the underlying sadness of it being sung by someone for whom life was such a struggle, not least against her addiction to heroin, and who probably never did truly experience the feelings that the lyrics so brilliantly capture.

This is one of those songs that I can listen to over and over again. It’s also one that I have performed myself and will do again. I can particularly relate to the sentiment of the lyrics – being guilty of making the wrong choices, and the negative feelings that induced. And I love the passion and power she brings to the delivery of the song.

John Mayer is not everyone’s cup of tea, I know, but this is such a brilliantly written song. I think we’ve all been in that place where you are hanging on to a relationship and you know it’s going down in flames, but you are still there going through the motions – the dance of love if you like – while the fire crackles around you. And because of the scenario it describes, this song is one of the saddest I’ve ever heard. It’s about that moment when you know it’s over, but you are still there hanging on. Whatever people think about Mayer – and I’ve heard all the criticisms – it’s a great song.

4 – Joe Cocker – A Little Help From My Friends

This has been our encore song for several years and it always seems so appropriate. Throughout this phase of my music career, I have received help and support from many people, most of whom are named on the sleeves of the album. But, in addition to that, at the end of a gig, I feel it particularly appropriate to recognise that sentiment of only being there because of the support of others, especially the audience, without which we are nothing. And I choose the Joe Cocker version of the song because I love it and I do it ‘a la Joe’ and also as a tribute to his memory.

This may not be a popular choice either, but this is a song with a theme to which I can completely relate – the notion of music as healing in a difficult and challenging world. As someone who first turned to music as a way of making a mark in the otherwise bewildering time of my teenage years at school this really does – if you pardon the awful pun – strike a chord with me. And, I’m sorry, but I love the fact that he fuses genres because as a songwriter I love the idea of going where the music takes you rather than being hemmed in by classic notions of what is and isn’t in line with people’s expectations.

This is a beautiful song in every respect – lyrics, tune and execution. Not a lot more to say than that really, except that perhaps to say I can relate to the notion of being drawn to someone who is clearly ‘trouble’ – maybe in the past, anyway, not anymore!

This one of those songs that makes me want to cry and I am not one of those people who’ll routinely cry at songs. I don’t think I have ever heard a live recording of a song so perfectly delivered – it couldn’t be improved if you tried. And, it’s one of those occasions where the live performance is worlds better than any recorded performance that the artist could deliver. It’s about the moment. Live recordings can suffer from technical limitations but occasionally the recording captures something unique and this is one such occasion.

Quite simply, I used to sing this in a band years ago, I admire Shemekia Copeland as a singer and this is a great rhythm and blues/Rolling Stones type song. I can offer no deeper deconstruction than that – just a great song, delivered superbly.

See above under Shemekia Copeland! Another great song that I have performed myself in the past and one that I have introduced others to on several occasions. I am also aware that it is a song and band admired by other artists I know.

We went on tour as support to King King in 2015 and that was the start of a friendship with Alan Nimmo which developed through further supports and, in particular, in giving him some vocal coaching in the recovery from his voice operation. However good you are as a songwriter, you know when you’ve created something special, and Rush Hour is one of those very special numbers that will have made a lot of people into King King fans. And I can particularly relate to the lyrics because there have been many times when my life has been a whirl from dawn to dusk!