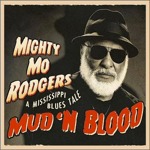 The album is the sixth part of the Blues Journey where Mighty Mo Rodgers evokes the dark history of the Southern States, including the recalled memories of an uncle who spent twelve year’s on a chain gang and his own father who was born only twenty year’s after the abolition of slavery. This is an album full of dark tales that sets the spine tingling and brings a chill to your heart as the words tell the reality of the misery and dirt that the blues has a foundation; racial injustice, cruelty and intolerance. The track listing splits the album into three sections Twilight: the opening two tracks, The Dark and The Light: the last seven tracks giving the album a shape and a narration that feels like a book. Goin’ South opens with narration with quote from William Faulkner; “To understand the world, you must first understand a place like Mississippi” and then his statement to ‘understand Mississippi you must understand the blues’ leading into Haunted By The Blues an emotionally charged opening and now it gets darker! The Ghost Of Highway 61 is full of imagery starting with moody music and rumble of thunder the atmosphere is created this is music in poetry history told in the beat, the ghost is given a ride and educates with his words, that shaped Mississippi, this is the blues Jim Crowe, Slavery and chain gangs must be put in your songs. This album is the blues full of powerful imagery with hollers, and the words that shape a dark history. Then we move into the light, with an upbeat Juke Joint Jumping’ blues that makes you dance but with its feet firmly attached to the past. This is an album to listen to from beginning to end and consider the roots of blues and real journey that leaves you moved as the last notes of Almost Home fades away and epic story has been told.