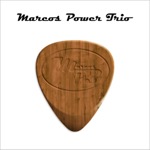 Marco’s Power Trio is led by the guitarist and composer Marcus Roagna,.with strong support from bassist Fabricio El Coenda and powerhouse drummer John Joe Roma Romagnolo, who between them power along this 10 track album that ranges from blues rock, to country, funk, jazz and acoustic driven ballads. They pack a lot of noise, notes and movement into this album, which has put them out at the forefront of Italian Blues Rock. It starts with the ZZ Top like rocker of Chopper, whilst the Hendrix ballad style is all too apparent during La Rua, and during London Banana a definite Jazz-Rock style is obvious, with a Jeff Beck like thick, stinging tone applied to a soundscape that shifts all over the place, and shows the serious intent that these three talented musicians have in putting their messages across. Catfish is a gentle solo acoustic blues piece. Canyon is a more melodic proposition, with slow blues bend starting the song, before a fine country blues rhythm comes out of the traps, with tuneful, singing guitar, redolent of Mark Knopfler, Eric Johnson and David Gilmour leading from the front. This is an album that is full of mature musicianship, a lot of genres, and some good instrumental tracks. If you like the names mentioned above, or a less frenetic Frank Zappa, or Joe Satriani, this album would be a fine addition to your record collection.

WILLE & THE BANDITS Release Double A-side Single
To coincide with the start of their Spring 2020 UK Tour...
Milano - Roma Blues Sessions 2020
MOULIN BLUES LIVESTREAM EVENT
Unfortunately due to the Covid-19 crisis, the Moulin Bl...
LEONARD COHEN'S Thanks For The Dance
The promo video for the title track from Leonard Cohen’...