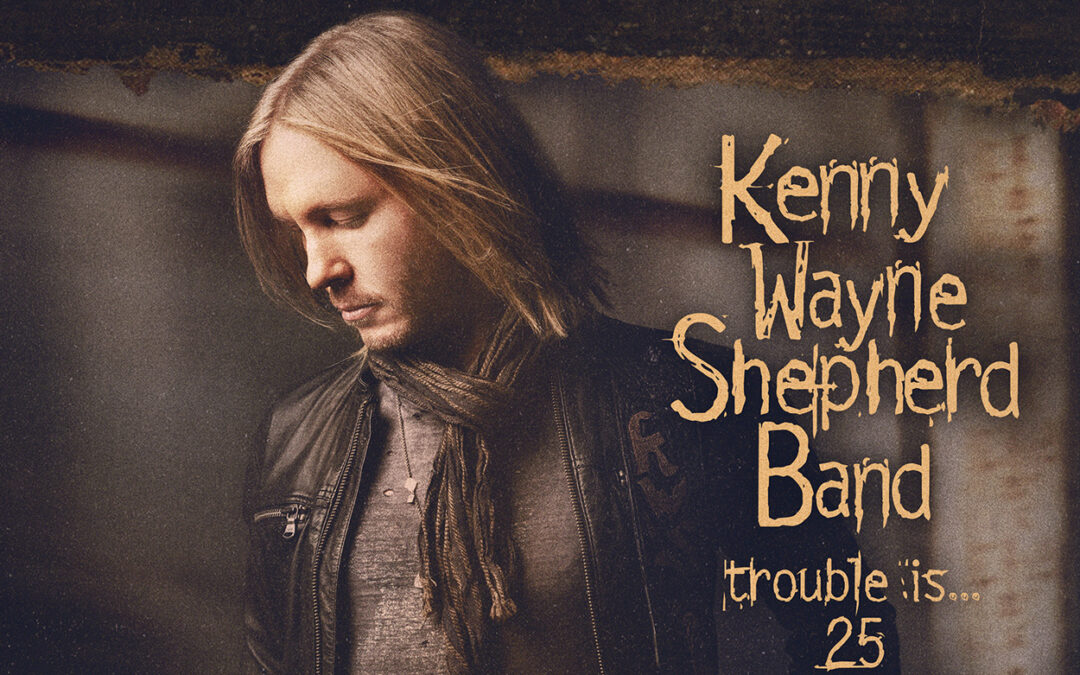 Kenny Wayne Shepherd announces ‘Trouble Is…25,’ Out December 2nd via Provogue Records/Mascot Label Group. The complete re-record of Kenny’s most successful album will be accompanied by a documentary about the making of the original ‘Trouble Is…’ and a live DVD filmed at The Strand Theatre in Shepherd’s hometown of Shreveport, Louisiana.

The five-time-Grammy-nominated guitarist Kenny Wayne Shepherd announces ‘Trouble Is…25,’ a top-to-bottom reinterpretation of his seminal album ‘Trouble Is…,’ which struck the match that reignited modern blues upon its release 25 years ago. Slated for release on December 2nd via Provogue Records/Mascot Label Group, the album (which includes a bonus track of an unreleased version of Ballad of a Thin Man) will be accompanied by a live DVD filmed at The Strand Theatre in Shepherd’s hometown of Shreveport, Louisiana, shot at the launch of his year-long celebration of the 25th anniversary of ‘Trouble Is…,’ which found the band performing the album, in its entirety, across the US. To celebrate the announcement, Shepherd has released a lyric video for “True Lies,” which he describes as “the classic infidelity song.” Watch the video here.

Great songs are not set in stone. Since he burst from the blues clubs of Louisiana onto the global music scene with 1995’s breakthrough first album ‘Ledbetter Heights, followed by his career defining second album ‘Trouble Is…’ in 1997, Shepherd has twisted those classic cuts into bold new shapes each night on the stage. Led by the pulse of the crowd, every last note alive in his hands, the ‘Trouble Is…’ tracks have always been on the move, never settling into museum pieces. But to give a quarter-century-old album a second birth is another matter. And in more recent times, the multi-platinum-selling artist looked up the road and saw the 25th anniversary of ‘Trouble Is…’ on the horizon, he hatched an audacious plan.

To join the dots from the hungry 18-year-old gunslinger who caught lightning in a bottle in 1997 to the still-questing master musician, with a lifetime’s soul under his fingers. To assemble the old crew from the original ‘Trouble Is…’ sessions at the Record Plant in Sausalito, California and attack the track listing afresh. And to remind seasoned fans and new listeners alike how this album struck the match that reignited modern blues.

“One of the coolest things about re-recording ‘Trouble Is…’ has been finding out – or verifying – how timeless this album really is,” says Shepherd, who is also leading a triumphant anniversary tour across the United States in 2022 and 2023, performing the album in full. “I’m so proud of what we accomplished, and also the fact I was just 18 years old when I did it. I mean, I had an experience with this album that most musicians can only dream about. ‘Trouble Is…’ sold millions of copies. There’s validation in all of that for me.”

Having pricked up ears with 1995’s sparky debut ‘Ledbetter Heights,’ ‘Trouble Is…’ hurled Shepherd headlong into contention. These were songs and performances that shouldn’t have been feasible from a teenager barely out of the classroom, yet the bandleader was already standing shoulder-to-shoulder with a veteran studio band that included the iconic Double Trouble lineup (drummer Chris Layton, bassist Tommy Shannon and keys man Reese Wynans). 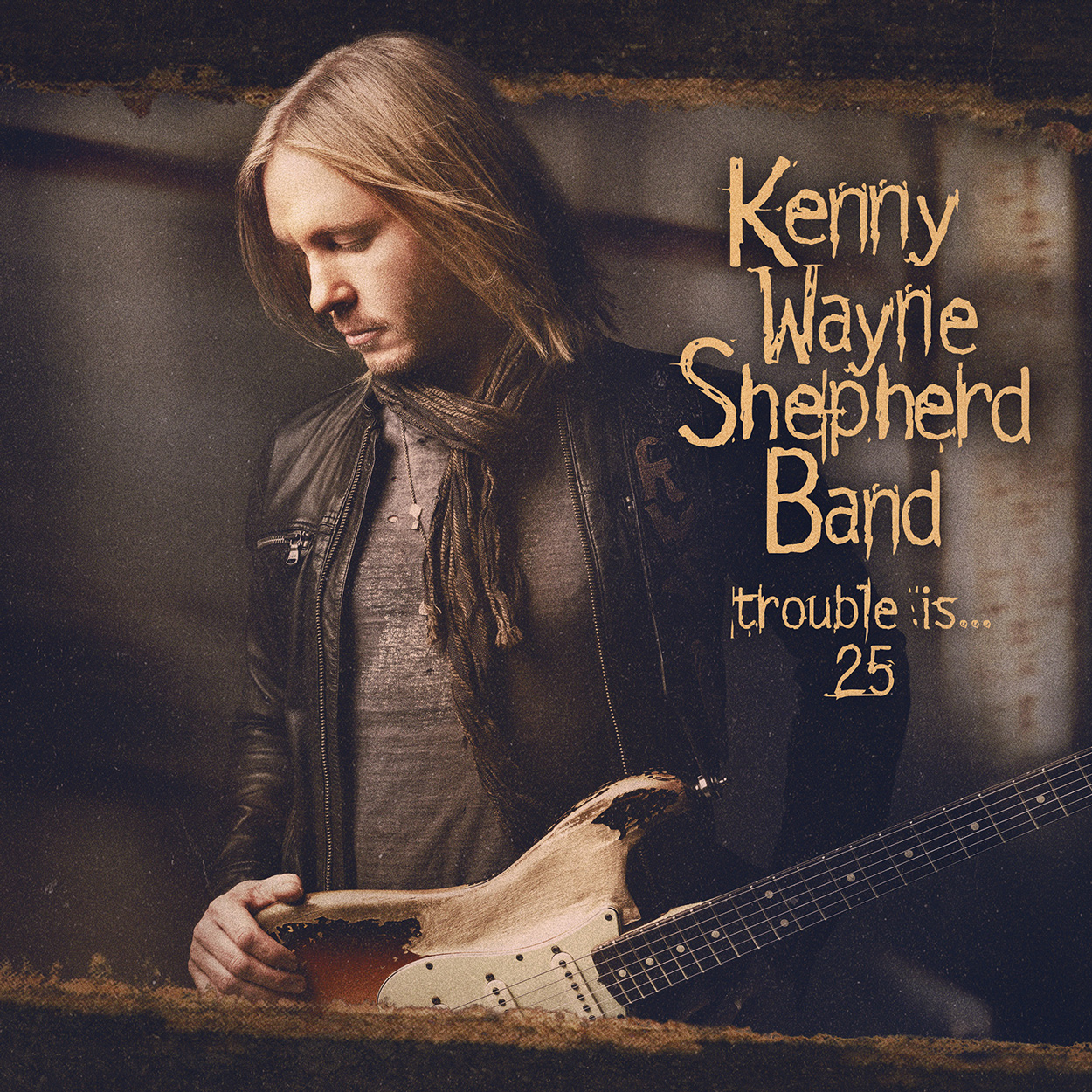 And while he had yet to find his own singing voice (then, as now, Noah Hunt handles powerhouse lead vocals on ‘Trouble Is…) Shepherd’s precocious guitar work was in a different class to the fading grunge scene, one moment white-hot on originals like Slow Ride or the title instrumental, the next rivalling Jimi Hendrix himself on a wiry cover of “I Don’t Live Today.”

In the ensuing 25 years – a period in which Shepherd has released a further seven acclaimed solo albums, not to mention two with his all-star side-project The Rides, alongside Stephen Stills and Barry Goldberg – some aspects of the reborn ‘Trouble Is…’ album are unavoidably changed. The Record Plant closed its doors in 2008 (the new sessions went down at The Village in Los Angeles and Nashville’s Ocean Way), while Shannon has retired from the music scene (he’s capably replaced by Shepherd’s regular low-ender, Kevin McCormick).

“Aside from Tommy, we got the whole crew back together, with Jerry Harrison co-producing once again,” reflects the bandleader. “And in the studio, it felt like no time had passed. If you play well together, you play well together. It worked back then and it worked just as well this time. It was all of us live in a room. That’s just how I do it, man. I’m old-school. Human beings need to be in the same room to be able to play music together.”

Other elements of the re-recording were uncannily identical, with Shepherd digging out the exact same ’61 Fender Stratocaster model and backline that he’d used back in the late-’90s. “For amps, I had one of the very first Fender Blackface Twin reissues that was ever made. And then I had a Vibro-King – and that hasn’t really been used again since I recorded that record the first time. So we had those two amps and then a Blackface ’64 Vibroverb. I still had all the original pedals I used back in ’97 – a Uni-Vibe, a TS808 Ibanez Tube Screamer, a Klon overdrive, the Roger Mayer Octavia. I’ve never gotten rid of anything. I’ve never sold anything. So if there’s anything floating around out there that once belonged to me, it’s because somebody must have gotten sticky fingers, y’know?”

Ultimately, says Shepherd, the minutiae of his rig was less important than the spirit in the air. “I didn’t want ‘Trouble Is…25’  to be a surgical process. I don’t like to overthink things. I just wanted to go in and capture the vibe. There were a couple of ways we could have approached this new recording. We could have done a one-hundred-per-cent faithful reproduction. Or we could have done a complete reinterpretation.

Times change. Artists evolve. Music scenes rise and fall. Back in 1997, the original ‘Trouble Is…’ was embraced by a rock ‘n’ roll generation crying out for something of substance as vapid manufactured pop began its inexorable rise. “ A full quarter-century later – with manufactured pop holding sway and humanity clawing its way back from a spirit-sapping global pandemic – the anticipation surrounding the reborn ‘Trouble Is…’ album and live shows stands as testament to a collection of songs that have never sounded so thrilling, empowering, unflinchingly honest and unapologetically human.

“During the ‘Trouble Is…’ anniversary tour,” says Shepherd, “everybody was commenting on how this album could be released today and still be just as relevant as it was 25 years ago. Making this album in 1997 was just a really monumental achievement. The new recording was a serious trip down memory lane for me. And I’m still so proud of these songs…”