JIM ROBERTS & THE RESONANTS – A Month of Sundays 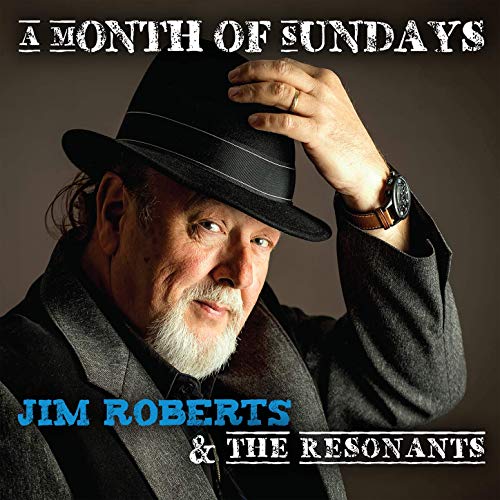 Album Review for Jim Roberts & the Resonants – A Month of Sundays.

Jim Roberts is no newcomer to the blues world. In a previous incarnation, he was the true mastermind behind the JRHB band, a US West Coast outfit that exploded onto the scene with the memorably excellent eponymous ‘Devil on a Dirt Road’ album in 2014. He then continued on the same trajectory with ‘Beneath The Blood Moon’ in 2017 with the same bunch of LA blues sidemen, before making a move to Europe where he now bases himself in France for much of each year.

With ‘Month of Sundays’ Roberts again surrounds himself with quality musicianship and a 12-track release that again highlights his truly remarkable power and strength as both a singer-songwriter and a strident, masterful slide guitar picker. Roberts sets the pace with instant delight and purpose, his fretwork always pushing the edges while his lyricism rips along purposefully.

Once more back home in LA, Roberts nevertheless spends a major chunk of each year working in Europe where his reputation as a bluesman with fire, passion and power, ensures he is constantly busy. With the release of ‘Month of Sundays’, it seems certain that Roberts will yet again be a firm favourite on the French blues circuit next year and we can only hope he turns his eye to the rest of Europe which can also share the benefit of his tasty slide-work and driving vocal delivery.

‘Month of Sundays’ is a rare release, an album that never flags or fades but instead delivers top-dollar edgy blues with searing power and passion from start to finish.