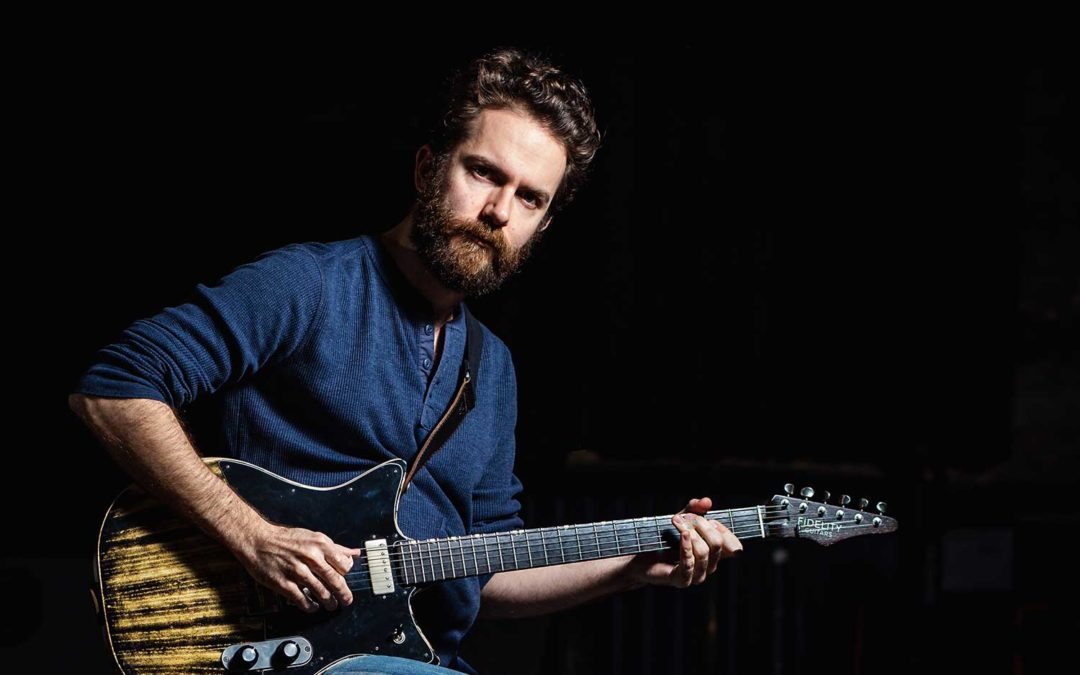 On Monday the 8th of February Jed Potts & the Hillman Hunters released the single Swashbucklin’ – the second of a new series of singles focusing exclusively on original material. Reassembling the same team responsible for the band’s self-titled 2018 debut album, Swashbucklin’ was recorded and mixed by Graeme Young at Chamber Studios, Edinburgh, mastered by Reuben Taylor; with artwork by Craig MacFadyen

This single fits in with the fun loving side of the band. The lyrics are smart and sharp, which suits Jed’s guitar style and feel-good blues and rhythm swagger. There’s some great shuffle here, a real toe tapper. Bass man Charlie Wild and drummer Jonny Christie are the powerhouse rhythm section behind keeping the groove going.

This is another original song from a solid and enthusiastic trio. Their live shows are a delight and they have a discerning fan base growing in numbers after their first album release Jed Potts And The Hillman Hunters. Got the chance to have a wee chat with lead singer, guitarist and songwriter Jed Potts. We talked about the new release and a few other topics, including jigsaw theory. It went something like this…

How have you as an artist been coping with this pandemic?

I am using this extra time to be more creative. Catching up on things I should have done. I’m self-employed and have had to go into my savings but wait and see what happens. I’d accumulated lots of phone recordings of riffs. I turned these into tunes. We recorded the new album in August and then mixed it. A lot of work goes into finishing one song from those phone recordings. In the past week, I’ve managed to get access to a rehearsal room. It’s somewhere I can go and play LOUD and sing properly as well. Singing is a hard thing to pretend you’re doing! I need to be at full volume.

Yes, how do you look after your vocals when not singing?

I don’t know! Before this pandemic I could do four shows in a day, it wouldn’t bother me, my pipes were in good shape. I did the vocal takes when I did the Hillmans stuff. It’ll take some doing when I do a live gig again. My voice feels the same, but I’ll probably get hoarse after a couple of tunes.

About your songwriting style, especially noted on Swashbucklin’, does the lyric come first or what?

Swashbucklin’ started as a word in a memo. I thought it was funny using this as a verb. It felt like it would fit in well with the Hillmans humour. It started out with having more sections than recorded here. There was the riff but also a written solo. Me and Charlie got together on this material and hash out the songs together. He said the vocal melody was the main thing here. So take away everything else and see what we’re left with. We held onto the guitar riff at the end. I was trying to play like Professor Longhair, but on the guitar! I came back from America after doing the Long Shot album with Brandon Santini. After that, I felt we had to write our own material and have our own style. Blues music relies on the artists’ personality, in their playing, singing or band style. We want to be the only band to do that thing! I messed around with the phonetics. The verses came in one sitting when I got that headspace. Blues to me is like writing twelve bar jokes. You need a good set up and payback on the last line. There’s a lot of trial and error goes into getting the right feel for a song. So it works a bit like a pop song. I liked having to figure out which types of characters could personify the concept of “swashbucklin’”; the pirate is fairly obvious, but the tomcat and the paratrooper slightly less so.

Single number two, how many are you planning to release or are they going on a new album?

We did nine tracks in August, Seven are completely finished. Another, I recorded everything but no guitar, this will be separate. First album we had three or four originals. Material now is all original. I like the idea of doing singles it appealed artistically and to keep an ongoing conversation going with the fan base. It’s almost impossible to recover your money by doing this.

How difficult has it been to record during this pandemic?

Most is taken care of remotely by computers. Not much change other than maybe doing the full music release show. I still listen to albums all the way through. You put all your eggs in one basket if you just finish making an album. You put it out it becomes old news soon! When they are all released we’ll make a decision on whether they go on an album. The good thing about doing it this way, you get to release it for another month and so on. Folk are saying they like it but because I’m not out these days… 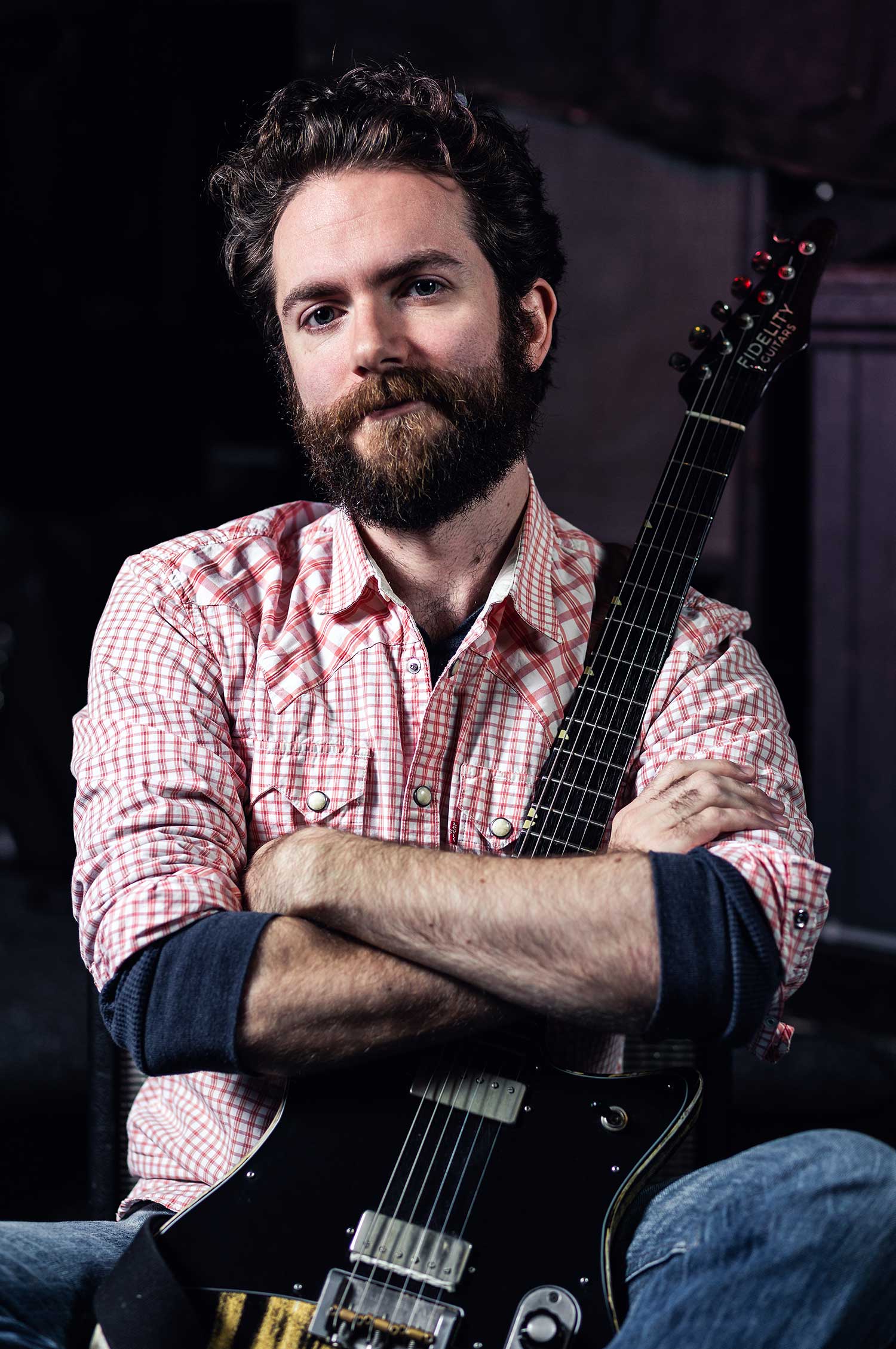 Any plans to make a video to go with the song?

We’re thinking of releasing the Car caves session as a You Tube video. Maybe make a download package of this as well.

Been doing any live streams recently?

It doesn’t appeal to me to be honest. The things I want from live music as a player and a gig goer are not representative on live streams. Car Cave gig was our way of showcasing. You rub out the mystique sometimes. It’s about being with the band and playing to an audience. It’s gigging or nothing for me so far!

Could you tell us about the making of Rockin’ Around The Christmas Stream, How did this come about?

I thought we do it for charity anyway and we have a lot of musicians at our disposal.    Mike Kearney was involved I asked him and he said make one big thing, he did all the technical stuff, video editing. The workload was split. During this stream there were a lot of live songs in people’s homes.

Do you think when live music returns, live streams will still go ahead?

One person singing songs in their own rooms may burnout. There is merit in live streaming from a gig. A lot of people are not comfortable in a live gig setting. They may prefer to pay to watch it live at home. For me, if I’m not playing one night I’ll be going to a gig somewhere! When live music starts, there will be limited capacity so they may be reliant on live streaming who knows..

What’s the best musical advice you have had and from whom?

Michael Lee from Snarky Puppy did a workshop when they first toured. He said “Never underestimate the potential of a situation”. For me this translates as If you go into a gig or venue and the situation seems less than ideal, don’t put the baby out with the bath water. There’s a lot you can do to let you have the best chance of having a really good gig. That’s something I live by. Especially with the Blueswater Band I play with. It meant we could go into a Village Hall and make the best of the situation.The Hillmans like going into some place that makes us laugh. We did the Dundee Blues Festival and played in a converted 70’s Chinese Restaurant. If you’re doing it right, the environment does half of it for you! Sometimes, venues that are made for music can be very sterile places.

Any tales from the road that stick in your mind that you can share?

I was roadie with an Edinburgh band, Man Of The Hour, a metal band still going strong. We were away for a week around the UK touring. The amount of stuff that happened in that period of time was outrageous. The first gig, we managed to break the van key in the back of the van.The equipment was in the venue all our clothes were in the back of the van! We were all wearing Man Of the Hour t-shirts. Next day we had to get a new key cut for the van. We drove with the handbrake on for a while. We stopped phoned the AA.When he arrived we could tell he knew what we had done. Later we crashed the van. We slept in the van once, freezing. We went to Asda in the morning at 5am to heat up, putting our hand in the rotisserie for hot food.

Anything about Jed Potts that we don’t know about and you can share here?

I’ve been getting into doing a lot of jigsaws! Start of lockdown we got bored, Charlotte my girlfriend, raked around the cupboards and found a jigsaw. I got zoned in on doing it! I was like Richard Dreyfuss in Close Encounters, wrapt. What was interesting and is still happening. You heard of The Golden Ratio. It’s a thing in nature, primal formula. It deals with the phenomenon of the three and a half minute pop song; everything lands in the same place and makes sense. I found all the ideas like the phone riffs, I knew they all fitted somehow together but didn’t know how. When I started doing jigsaws I was able to structure these tunes. When I’m working I don’t use an audio work station, I just use my guitar and make a phone recording. With music, I think you’re putting together a puzzle. I’m tapping into the universe now!  I am collaborating with a mate doing some heavier music. He had demos, we jammed, and a lot of those songs were done using the jigsaw ratio! I love heavy stuff, it naturally falls out of my guitar when I want to play the guitar, and it’s primal.

You have so many different projects and in a few other bands, what’s the news on them?

All on hold really. We did a whole bunch of new music with Katet. We live streamed it in the studio. We created music from scratch. We made lots of music with structure and lyrics! There’s an EP hopefully we are working on with Swampfog. Also with Blueswater we want to do something live! There’s a part of you that wants to keep creating. But when you don’t know when you’re actually going to play in front of people, it’s like you have to convince yourself that you will be! It’s one way creativity there’s no bounce back from an audience just now. My analogy is, it’s like a boxer training for a fight but doesn’t know when that will happen! I’m a musician in my bones, it doesn’t matter if I make a living out of it though I’d like to. It’s woven into my being. Go to gigs when they come is my advice to fans and Blues Matters readers.

Thanks Jed, good luck for the future!

Cheers Colin, see you later, thanks. 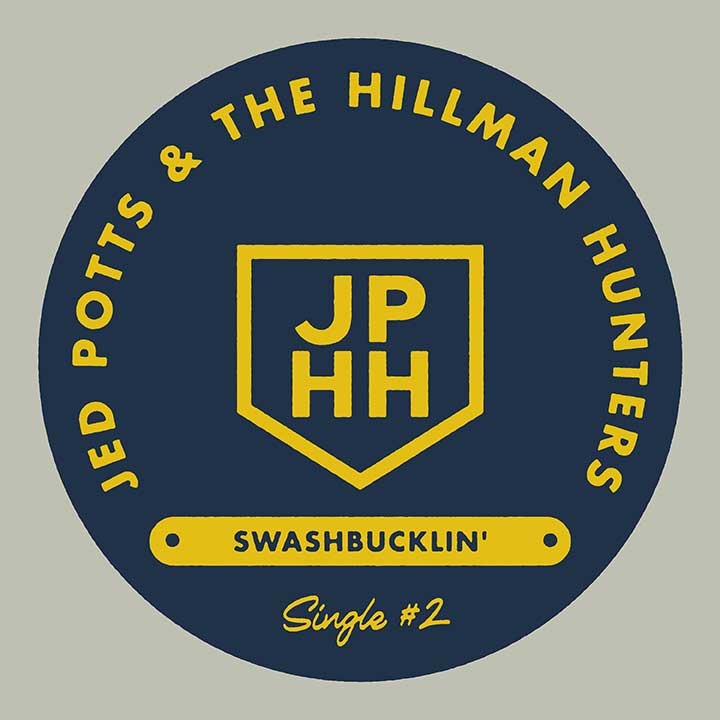 Jed Potts & the Hillman Hunters are: