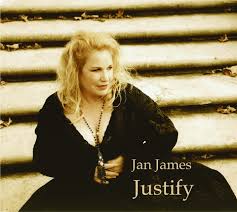 Raised in Michigan where she earned her first accolade as Best Female Vocalist, Jan and her songwriter-guitarist partner Craig Calvert moved to Chicago and played the famous Legends and House Of Blues venues. She was initially signed up by the prestigious Provogue record label and following several albums and a quarter of a century singing the blues, James and her band have produced a clear statement of where they are at with Justify.

The title track confirms the chemistry between Jan and Craig, her powerful, anguished vocals a perfect match to his searing guitar work. No wonder she was cast as Janis Joplin in a Chicago play and recognised as a major talent of similar ilk.

Good Man Down showcases the musical prowess of all eight musicians and their collective force as a blues-rock powerhouse. The rhythm section lays down a heavy groove on A Different Life which complements the dark vocals. By contrast, the ballad Try highlights Jan’s vocal versatility with its softer mellifluous opening vibe whilst the slow-burning Never In The Game showcases the intricate side of Craig’s guitar repertoire.

Surprises are in store throughout, such as the quirky, up-tempo gospel-inspired Anything You Want with its classic line, ”He had his way with her but its okay cause/ He did it on his knees.” Referring of course to prayers! The many highlights include the rocking Lucky U R, an impressive version of Jagger and Richards Honky Tonk Woman and Where You Gonna Run To with Jan’s voice ranging from crooner to blues blaster and all points in between.

However, Jan’s songwriting and vocal delivery are at their best when she is communicating her reflections on love and relationships with sincerity and candour as in the finale, Dangerous Decision. She reaches her conclusion that “A dangerous decision has left me stranded/ And blue – A dangerous decision to fall in love with you.” The deep empathy of all the musicians results in a climactic, virtuosic swirling sound of coloratura-esque proportions, bringing the song and the album to a dramatic close.

Jan James has paid her dues and probably has not yet received the recognition that her inner soul deserves. Hopefully, Justify will change all that.