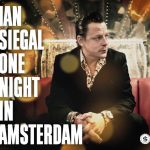 Award-winning British songwriter, Ian Siegal, is set to release “One Night In Amsterdam”, his first full-band live album on CD and vinyl on March 9th. Released by Nugene Records, the new album dovetails Siegal’s nationwide March UK tour which kicks off at the Chester Live Rooms on March 17th. Fans can pre-order the limited edition vinyl version of the album via Ian Siegal’s website

While Siegal’s 2014 album Man & Guitar showcased the award-winning British songwriter as a solo acoustic troubadour, One Night In Amsterdam flicks the power switch, marking Siegal’s first live album with a full-throttle electric band. Chalk up another first for the man that Mojo called, “One of the most innovative, gifted and engaging blues performers on the planet today.”

Siegal is able to draw on an astonishing eight-album catalogue that has scored him seven British Blues Awards in five categories (he’s also the only Brit ever to receive two nominations at the U.S. Blues Music Awards). The bar for Siegal’s live albums has been set sky-high by Man & Guitar – recently crowned Blues Album of the Year by Mojo– but from the opening notes of One Night In Amsterdam, it’s clear he’s up for the challenge. The new album includes a free bonus track Hard Pressed – unlocked via a download key available on release day, March 9th.