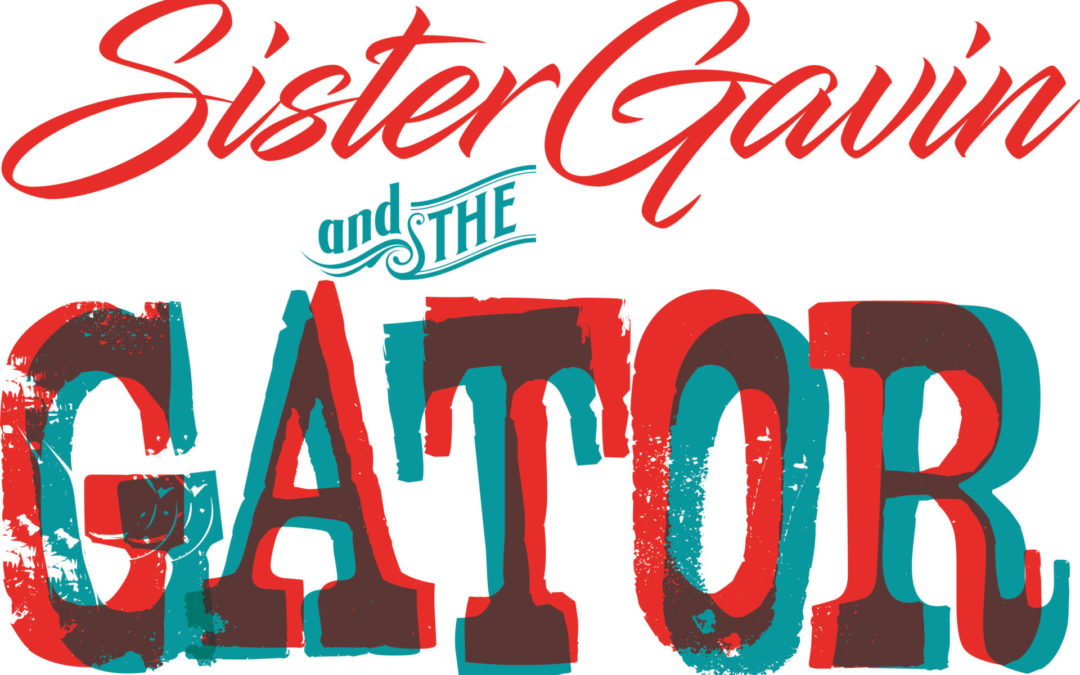 Hope At a Desperate Time by Colin Campbell

An interview with Iain “The Gator” Donald of Scottish band, Blind Lemon Gators, whose recent album, Gatorville has gained a lot of plaudits. He joined forces with Scottish singer Greig Taylor to form the initial duo and recruited Rod McKay on bass and Dave Cantwell on drums to produce a traditional and emotive interpretation of the Delta blues sound.

Iain is a top-class slide guitarist, but his first instrument was bass guitar. He comes from Alloa, but his musical roots lie in the Mississippi Delta. We talked about various subjects, including various projects he has on the go to help him get through this time of the COVID-19 lockdown. It went something like this…

Hi Iain how’s it going, where are you just now?
In Alloa at the moment. I’m quite fortunate to have a day job, I am a butcher so am classed as a key worker.

How are you coping with the confines of the lockdown due to this COVID-19 virus?
I miss playing regular music with Adele Gavin at the moment. I find when I’m in the house alone I like to indulge in listening to and playing music. I feel I’m getting better as a musician because of it! It’s a nightmare, not so much financially, but it takes the momentum away from what we do live. Everyone’s in the same boat though, guys at the highest level are in this boat too! It’s a shame.

You’ve been doing some live streaming, how does that feel, what feedback are you getting from that?
Yes. I’ve got another “roots “project on the go. There’s a girl, Adele Gavin, I have known for some years, I think she’s one of the best female blues singers I have heard ever throughout Scotland, and she’s incredible!

She came into the pub recently; I was struggling for a support act for the Tollbooth show in Stirling. After that show, we started working together. She’s in her twenties and plays all the Chess Records songs. She’s a purest. So we formed Sister Gavin & The Gator on the back of The Blind Lemon Gators, which is me and Greig Taylor. It’s great fun but this virus has fucked everything else up so we’ve ended up doing live streams of songs on my Facebook page.

The feedback has been on the lines of people thanking us for lifting their spirits and giving them a break from what they are experiencing at the moment. After speaking to a pal we thought a lot about local charities who are suffering too. I come from a deprived area myself and I can relate to all the people there who are suffering. I asked some pals if they were interested in setting up a charity stream page where every night there would be someone doing a turn and donations go to three charities. We now have about fifteen local acts. Warren Capaldi (Lewis’s big brother) jumped at this opportunity. It’s a good way of handling the Blues just now!

The money accrued is not going to the bands unlike other Crowdfunding ventures, how does that work? It is extremely selfless of the individuals concerned.

I wanted all the money to be distributed evenly, so I set up a Facebook page and added the acts as Editors, so the acts can stream to their Facebook pages. I’ve done all the artwork, busy! People seem to want this to do well. The biggest deal is during that 45-minute slot listeners can forget about their troubles, for a wee while anyway.

Can you tell us about some of the artists involved in the project, are they all local to the Stirling area?
Only Aaron Wright from the Indie scene and Warren Capaldi are not. They have been a help, Adam Donaldson from Falkirk a saxophonist has been solid. Laura Begley from Stirling, Iain Whitfield, the list is endless. The blues is a particular feeling as opposed to a particular sound. The only reason I’m any good is that I don’t play in the necessary bounds used. I play my electric bass as an extension of what I have to say. I believe just now when young people say we don’t really like the blues, we’ve all got them! This is bringing people together when apart, that seems to make sense. 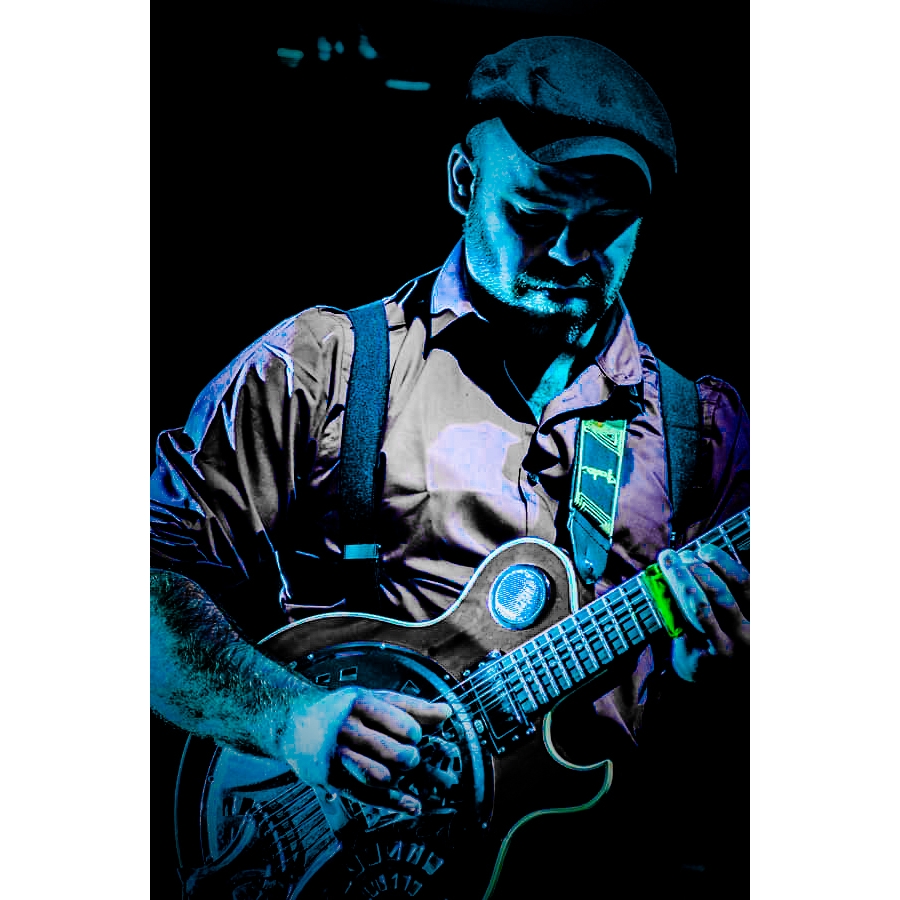 Any plans on maybe putting an album together with the artists involved?
This came to me today, it’s the second anniversary of my mother’s death soon, think I’ll put this up for discussion.

Is there an educational role to this as well?
Yes. In the blues scene, there are too many traditionalists that hold it back. People forget, Robert Johnson and Charlie Patton were innovators and in order for us to flourish in the blues scene nowadays we need to be the innovators. Which to me means traditionalists need to be open-minded. There are a lot of blues standards that people want to hear a certain way but I’m not playing it that way. We wrote an arrangement of “Goodnight Irene” on the Gatorville release for my mum. In my head, that’s how it should have been written lyrically.

Can you talk about your music career, what got you into playing the guitar and blues in general as a genre to play?
I started by playing bass. It was about me being able to express myself as a youngster; I obsessed over bass guitar techniques. I was asked to play with GTs Boos Band because I had the technical ability to play. Greig thought I wasn’t into playing blues because of the way I played bass, but when I wrote the music for Gatorville, I felt every note. I then started to focus on becoming a blues player, I play a bottleneck guitar. I met Greig a few years later and asked if we could sing a song. When he heard my interpretation, he had a eureka moment. I can speak to people, through playing the way I play the guitar. For me, it’s also about having the technical ability which I feel I have a lot of! There’s the fret before and the next fret when you’re playing. But when you play slide, there’s a note in between there and you can’t hear the difference but you can FEEL the tension and people feel this as well when I’m playing live. This has kept me playing the guitar.

You’re presently working with Greig Taylor, collectively as The Blind Lemon Gators, how did you meet up and form this band?
We’re different, but we work well, and I like to play from the heart! I want to get more into Hill Country blues now, like RL Burnside and the like. With Adele, I think we can do something a bit different.

How does a lad from Alloa connect to the Delta blues sound, who are your guitar influences?
Charlie Patton or Robert Johnson are both on a par with each other. Similar in playing styles. Big Bill Broonzy for his piano arranging and his country blues was just brilliant. Slide players, Ry Cooder, Furry Lewis. Blind Willie Johnson, it’s hard to pick there are so many. Roy Rogers and Derek trucks who plays it all on one string! Last Of The Hill Country Bluesmen is also a great documentary.

Any funny stories we can print about your exploits on the road?
Last time we were on the Isle of Arran for a festival I stayed out with some of the other bands. Anyway long story short I woke up in a strangers house the next day with not a clue of where I was. Turns out it was just around the corner from the stage ha-ha!

What’s the blues scene like in Scotland these days, with bands like yours it seems to be thriving?
It requires devotion and commitment, a band like The Shiverin’ Sheiks, for example, are like this. Charlotte Marshall also keeps a good show. There’s definitely potential to get young people to get involved. On that, a guy I work with who is twenty-two knows all the words to “Hurt” one of the Blind Lemon Gators’ songs, the least expected for a younger person to sing, but it was put to him that this was on my album, he had no preconceptions that this was the blues genre. Blues is always evolving. The best song I think that describes the blues is by Steve Earle “My Old Friend The Blues”. He says blues is that feeling that makes you want to write that music, it will never let you down! It’s all about the feeling! 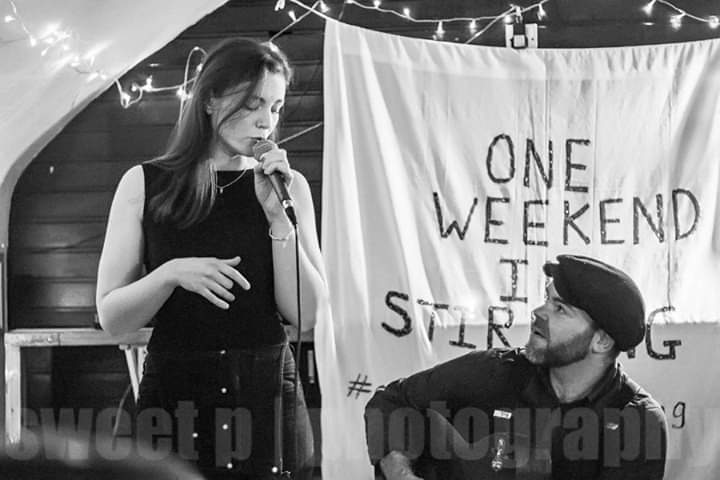 Anything you want to add that Blues Matters readers need to know about you and your music?
If you enjoyed my writing on “Gatorville”, you should keep your eyes and ears open for Sister Gavin & The Gator, we are going to produce an album of modern roots music. Got my teeth into this, I act on gut feelings and Adele wants to take her singing ability to what I do with my guitar. Watch the new live streams on the website! We did a version of, “All Of Me” by Billie Holiday and I think it really works. I’m also back working with Rod McKay; he’s a great guy very solid. He brings a lot of ideas that only a bass player could come out with. Don’t cover a song you can’t relate to. You have to relate to how you’re feeling, in, that moment. I follow my heart. I would also like to work with Michael Messer, he is an inspiration to me as well, and we may work on something in the future also.