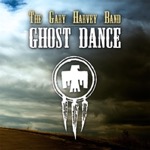 New Zealand blues can sometimes be a contradiction in terms, maybe because I can’t recall too many bands/artists coming from that part of the world. Anything missing from the spirit of its North American home, you might think is going to lack much of what has made the blues so great. On Ghost Dance, The Gary Harvey Band not only wear these influences proudly on their sleeve, but raise the flag for the blues revival, combining boogie woogie, hard rock and delta blues as if the 70’s never ended. Formed by bassist Harvey in 1996 on his return from Texas, this Auckland power trio made up with guitarist Tony Abbot and drummer Mike Beck, have become true veterans. Songs like Don’t Lie To Me and Ground Zero recall the Southern Rock the Allmans or Skynyrd, Harvey’s eerie vocals complimenting Abbot’s slide on the latter. The band can also do head-down bar room boogie with the best as on Nuthin’ But The Blues and deliver mainstream, angry urban hard rock with Tired Of Thinkin’ and Boss Mama. Abbot makes frequent visits to the States, when money permits and has a long time passionate association with Native Americans. With guests contributing on some of the tracks, this is a great accompaniment to a long run on a straight road.

KING KING UK Tour Rescheduled For 2021
King King are finally back on tour again. The Glaswegia...
HOLY MOLY & THE CRACKERS, RUTH PATTERSON I’d Give It All - Redux
Released independently by Blank Studios, the word redux...
CELEBRATING WOODSTOCK: The 50 Years After Party!
Celebrating the 50th anniversary of the world’s most fa...
Coronavirus And The Impact On Musicians
HOW THE PANDEMIC IS AFFECTING MUSICIANS With loads o...