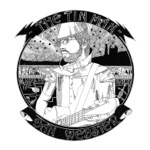 Here is a lyricist who can play his instruments with aplomb, and has written songs which resonate to life and is vocally, a joy to listen to. Webster has been on the music scene for some time but does not have the credit his work demands. That though is more of a comment on the idiosyncrasies of the record/CD buying public than it is about the Folk/Country/Rock/Americana form his music takes. Now I have to be honest and say that if anyone had asked me before listening to the Tin Man what form of music did I not take to, then Folk and Country would have been top of the list. This disc then is a sort of “Saul on the road to Damascus” for me, Webster and his colleagues have converted me. Track 2 Elvis fairly belts along but retains his clarity of vocals and this pace is then countered by the very next track Number 17 a gentle, melodic pearl ironically about war, but which was quite beautiful to listen to. Track 6 British Man of War may seem a bit dated in terms of its title, but rest assured the lyrics and vocals are as crystal clear today as they would have been in the early 19th century. Overall this is a disc for relaxing at home of an evening with a glass of something warm and fruity. The Tin Man in the Wizard of Oz needed a heart, but Dan Webster has plenty of heart and it is beating strongly in this album.