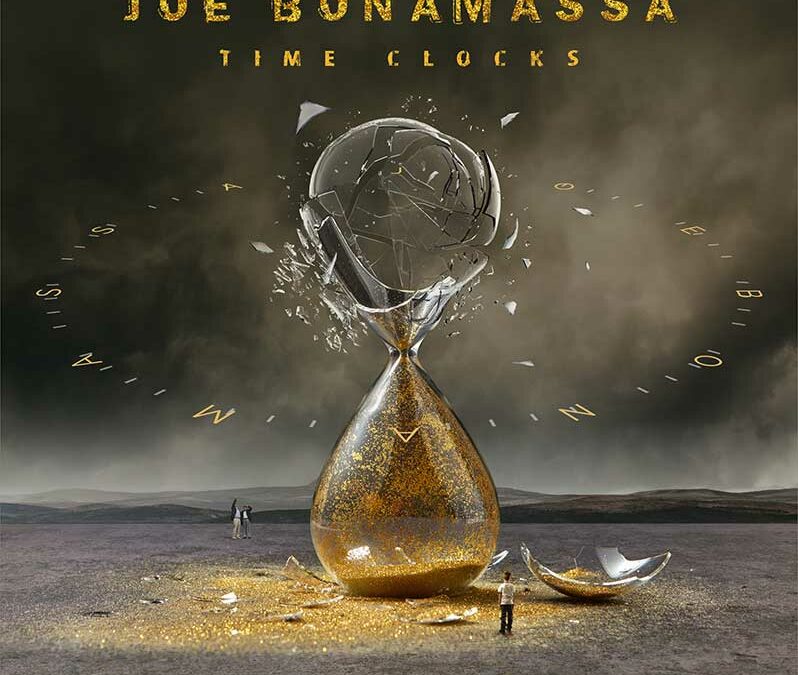 Joe continues his soul-searching evolution on this beautifully poignant Bonamassa-Shirley penned song. At just over seven minutes long, it has all the epic musical grandeur of him at his most expressive and ambitious. With a heart on sleeve narrative weaving its way throughout, the rousing chorus rises to the heavens as he sings, “and the rain soaking through my coat, about to capsize my boat I push it along away from the docks, I was never a good puncher of time clocks.”

Backed with cascading vocals from Juanita Tippins and Prinnie Stevens, as well as the supreme musicianship of Anton Fig (drums), Steve Mackey (bass), Lachy Doley (piano, organ) and Kevin Shirley (percussion), it has an aura of pure timelessness.

Fans can pre-order the Time Clocks album from https://smarturl.it/JoeB-MLG.

The album was recorded in New York City and took Joe back to his early roots and rediscovers him at a newfound peak with an unparalleled Blues Rock prowess. Known as the man in the suit, loved by many as the ultimate guitar hero, and cited by critics as “the world’s biggest blues guitarist” (Guitar World), somehow the music mastermind has found yet another layer of immense new artistry to share with his fans. Recently Bonamassa dropped hints of the new album with his reeling anthem “Notches“, and the Blues heavy single “The Heart That Never Waits“, another instant classic that takes a tale of heartbreak and turns it around into an undeniable showstopper meant for the stadiums.

The new album is a collection that sheds new light on Joe’s life as a journeyman, constantly creating and always on the run. As “Notches” and “The Heart That Never Waits” would suggest, this album shows that even though Joe chose the road less travelled, it’s led him to success in the end. And he’s not backing down any time soon. A bit older in years but wiser in knowledge earned, his new sound has a raw and vital flavour, combined with a resolute skill that can only be gained through years of perseverance and unyielding dedication. ‘Time Clocks’ follows Joe on his never-ceasing evolution as he continues to forge ahead, bending genres, breaking down walls and defying the odds of the music industry.

The album was mixed by Bob Clearmountain (Bruce Springsteen, The Rolling Stones, Toto, Bon Jovi), and the fantastic artwork on this album was created by famous graphic artist Hugh Syme (Rush, Aerosmith, Whitesnake).

“Time Clocks” is a song that has all the hallmarks of a sure-fire fan-favourite hit. As the world begins to open up and Joe the showman, Joe the entertainer, takes his place on this rightful home on the stage, you can already picture thousands of fans singing back the stirring chorus.

Now, with even bolder energy than ever before, Bonamassa holds the power of controlling both his artistry and his business in both hands. With 24 #1 albums, yearly sold-out tours worldwide and custom annual cruises, he’s a hard act to beat. Joe knows his worth, and albeit humble, he plans to continue to beat the odds and exceed the expectations of naysayers. ‘Time Clocks’ is a testament to his credentials and a toast to his long-time fans. It’s Joe Bonamassa at his finest, ready to rock.

In releasing new music destined for the loudspeakers, Joe is elated to get back to the stage. Recently completing a summer tour on the US West Coast, he’ll be back on tour for the fall season with shows across the rest of the country before taking the stage at sea for his sold-out Keeping The Blues Alive At Sea VII cruise, sailing from Miami, FL to Ocho Rios, Jamaica on February 21-25, 2022, by way of the Norwegian Pearl. Joe will also be touring Europe in Spring 2022. For tickets and full tour dates, visit www.jbonamassa.com/tour-dates.