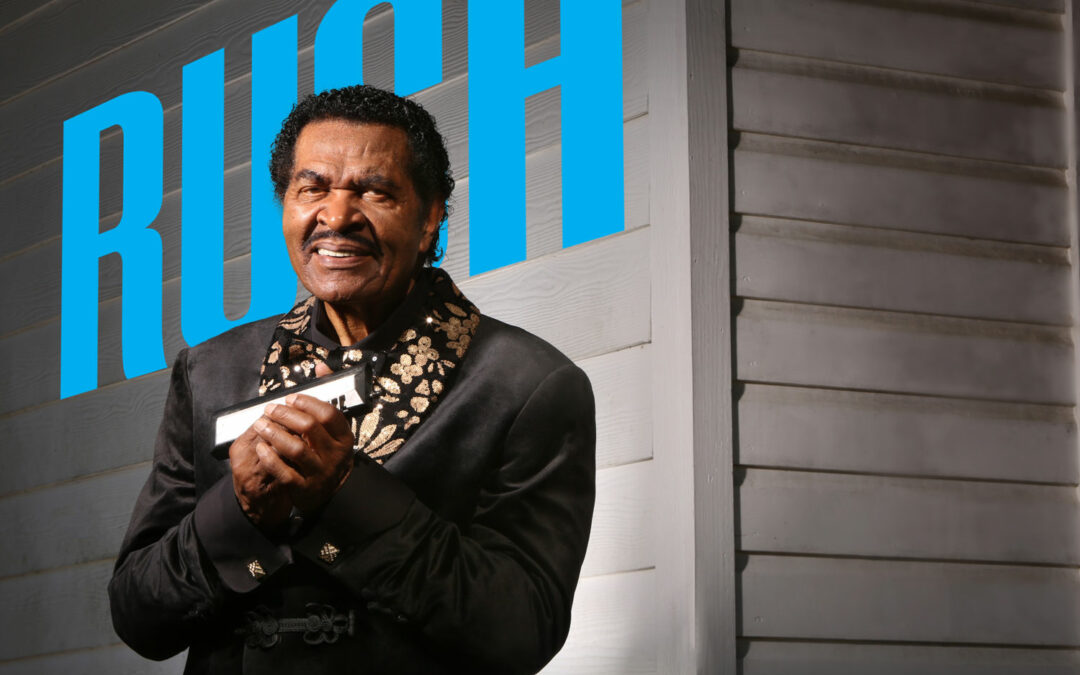 In the recent Recording Academy’s 63rd Grammy Awards for 2021, legendary bluesman singer songwriter and guitarist Bobby Rush has won his second Grammy Award. The Blues Hall Of Fame inductee won this for his Rawer Than Raw album, an acoustic stripped down tribute to the blues history of the Mississippi Delta, where he now calls his home State.

According to Bobby Rush, “I want to thank all of my friends, fans, and voters. I accept this Grammy on behalf of all of the people who came before me that helped pave the way for me. Some of the guys who came before me like Howlin’ Wolf, Muddy Waters, and B.B. King who were my friends and inspired me so much. These are guys that taught me not to never give up. I’m speaking about all of the guys who won. All of the guys who didn’t win, I take this on their behalf too. To beat out these guys, I’m so blessed to be in this kind of race with this kind of company. All of these guys are much better than I think that I am.”

Recently in Issue 115 of Blues Matters, I got the honour of chatting with the great man himself, we talked about various subjects including accolades such as Grammy Awards.

Bobby was very virtuous and thankful.

“They mean everything to me; it lets people know what I am doing. It lets me know in my heart I was on the right track all of the time! When I won an award I cried about it, I was in the right place at the right time. I had the right Management and people could see what I was doing”

Asked about setting up his own label Deep Rush records and the need for this he replied nonchalantly.

“It came about because I couldn’t get a record company to let me do what I wanted to do. They told me what they wanted to release, what I was supposed to sing, how to sing it and they just control you!  The song I won the Grammy on was called Porcupine Meat. There’s no record company in the world that wants to put out Porcupine Meat. I had this idea in my mind almost fifteen years before I released it! When I did put it out, you saw what happened; I got a Grammy for it!”

Finally, his thoughts were very positive about the future for the blues genre and how to keep the blues alive.

“The best way is to walk the walk and practice what you preach. You can’t tell me the blues is alright because you’ve got the House Of Blues over in the US and they play anything but the blues! If you love the blues and want to be true to them then play them, don’t be ashamed. I’m not ashamed of who I am, or being black. Wherever I go I just play the blues. I believe in spiritual things because that’s a road map of life telling me what I should or shouldn’t do. I’m a blues singer. I may have a funky rhythm but I want the world to know I’m a blues singer, harmonica player and guitar player and not ashamed of it!”

Regarding the album, it has eleven tracks, incorporating influences by Skip James, Robert Johnson and Chicago blues counterparts, Howlin’ Wolf and Muddy Waters. The connection and emotional feeling to the songs is the theme running through. Skip James’ Hard Times lyrics, they still have meaning, especially in this world pandemic. Before the interview Bobby had been sick with the Covid-19 virus, but after self- isolating it cleared up.

Regarding songs he especially likes to sing and play, he cited Chicken Heads.
“I guess, Chicken Heads. It’s a true story. My dad said you can lose your heart but don’t lose your head. My Daddy warned me about pretty girls wanting you to do things you shouldn’t! Just because they call it pretty don’t mean you should touch it! Porcupine Meat looks nice but you dare not eat it, it will prick you!”

Rawer Than Raw, was made simply with performances recorded as stripped back as required, just his vocals, guitar, harmonica, and feet. He also produced the album, along with executive producers Jeff DeLia and Randy Everett, who helped with the engineering of the project. The recordings were made in Jackson, Mississippi. The two focused on some of Bobby’s favourite artists, selecting songs that were not only representative of them but that also fit with his own acoustic style of playing.

Bobby Rush’s penchant for storytelling has culminated in his forthcoming debut memoir, I AIN’T STUDDIN’ YA: My American Blues Story, scheduled to release from Hachette Books (Keith Richards, Buddy Guy, Tina Fey) on June 22, 2021. Rush gives readers intimate access into his life like never before, transposing tales from his remarkable career over the course of five decades in the music industry.

Look out for a review of this in a forthcoming issue of Blues Matters.