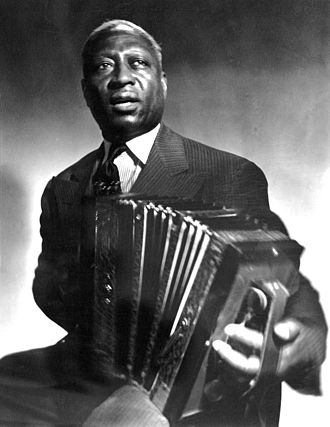 Huddie William Ledbetter (January 20, 1889 – December 6, 1949), better known by the stage name Lead Belly, was an American folk and blues singer, musician and songwriter notable for his strong vocals, virtuosity on the twelve-string guitar, and the folk standards he introduced, including his renditions of “Goodnight, Irene”, “Midnight Special”, “Cotton Fields”, and “Boll Weevil”.

Lead Belly usually played a twelve-string guitar, but he also played the piano, mandolin, harmonica, violin, and windjammer.[2] In some of his recordings, he sang while clapping his hands or stomping his foot.

Lead Belly’s songs covered a wide range of genres and topics including gospel music; blues about women, liquor, prison life, and racism; and folk songs about cowboys, prison, work, sailors, cattle herding, and dancing. He also wrote songs about people in the news, such as Franklin D. Roosevelt, Adolf Hitler, Jean Harlow, Jack Johnson, the Scottsboro Boys and Howard Hughes. Lead Belly was posthumously inducted into the Rock and Roll Hall of Fame in 1988 and the Louisiana Music Hall of Fame in 2008.

Though many releases credit him as “Leadbelly”, he himself wrote it as “Lead Belly”, which is also the spelling on his tombstone and the spelling used by the Lead Belly Foundation.

Lead Belly’s extensive multi-genre song catalog is consisted of well over 500 songs.  Among the most famous were Midnight Special, Cotton Fields, Boll Weevil, Kisses Sweeter than Wine, Rock Island Line, and many, many more.   You can also read more about the life of Lead Belly on the website of The Lead Belly Foundation, a non profit organization founded by Tiny Robinson, niece of Huddie Ledbetter to preserve and promote the musical legacy of the “King of the 12-string guitar.

Read more about the amazing life of Lead Belly including an extensive history on the Lead Belly Foundation website here.  http://leadbelly.org/leadbelly.html

When I Was A Cowboy – A blues original by Lead Belly

Listen to Lead Belly’s original song “When I Was A Cowboy” on Youtube from the link below – as it was before Ireland’s blues guitar legend Rory Gallagher paid a wonderful tribute to Lead Belly with his own interpretation made popular as “Out on the Western Plain” … if you love to hear raw original blues guitar – you are going to love this!