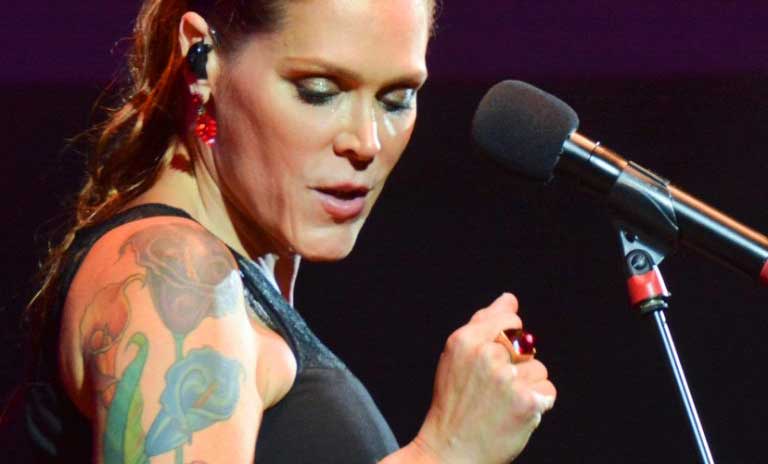 As the lights dimmed in a packed auditorium, the band appeared on stage, playing the opening bars of I Love You More Than You’ll Ever Know, but no sign of the Californian songstress we’d all come to see. Then, you could hear this amazing voice from the back of the venue and the star of the show was there, casually walking down the aisles, not missing a word, whilst hugging and shaking hands with her fans. She was followed closely by a man mountain, whom we later found out was her road manager husband Scott, not a man to meddle with! Eventually making it onto the stage and after a good luck kiss from hubby, Beth absorbed the adulation of the audience and went straight into Let’s Get Together from her award-winning new album, Fire On The Floor. I have to say I felt sorry for the people on the balcony because, for me, this gig had such an intimate feel to it, the way Beth introduced every song with a story, for instance her first stab at love, the boy’s breath smelling of Coca-Cola, or the dedication to Mother Theresa, the fact that she once lived in the Ugliest House In Town, how she beat up her father’s mistress on Tell Her You Belong To Me and the subsequent act of kindness shown by that same lady when Beth was at an all-time low. Don’t get me wrong, if you’re getting the impression it was all doom and gloom, far from it, it was an interesting narrative on the highs and (mostly) lows of this wonderful lady’s life. Her stage presence was mesmerising, especially when she delivered songs whilst sat on the front of the stage, looking intently and directly at those lucky enough to be within range, this intimate contact evoked a visceral response of utter adulation. It’s a cliché to say she had the audience in the palm of her hand, I would say the audience took her into their hearts. All too soon and after a soulful rendition of I’d Rather Go Blind, the curfew drew closer. So, on hubby’s say so Beth had to leave, but not before a dedication to her mother with Mama This One and an acapella, As Long As I Have You, to you know who! Finally, special mention must go to the band, Jon Nichols on guitar, bassist Bob Marinelli and an overworked Bill Ransom on drums. Canadian bluesman Colin James also deserves much credit for his support set along with his guitarist Chris Cordell. A veteran of some eighteen albums, he’s well worth checking out.