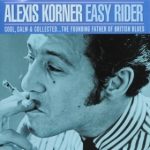 From the comparatively new label dealing with re-issues we have “Easy Rider” – an excellent double CD set of re-mastered Alexis Korner. The first CD is a selection of his early recordings with Cyril Davis and others featured include Ken Colyer, Beryl Bryden, Mike Collins, Chris Capon (where are these guys now?). There is even a track of Alexis accompanying Alan Lomax on the 1958 recorded song Frankie. The first CD has twenty assorted tracks while the second is the complete R&B at the Marquee album of twelve songs. The sleeve notes by Michael Heatley are a good but an all too brief reminder of a small part of history and more notes would have been welcome particularly to someone who may be discovering Alexis via this CD. The music though speaks for itself.