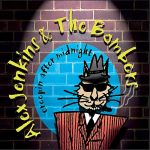 Alex “Wayne” Jenkins childhood home was only a few streets away from the now legendary Maxwell Street and as a result of this; he became surrounded by and eventually immersed in the atmosphere of the blues of the area. Merging this, with the natural curiosity of a child who thought nothing of peering into any open door or window that allowed him access to see such artists as; Muddy Waters, Howling Wolf and Buddy Guy, he developed a passion for the blues and was hooked for life. He started playing the guitar at the age of thirteen and all through the sixties he played in various local bands and although at one point, he lived in Los Angeles he decided to return to the Midwest where his musical heart lay; After a good number of years of working with his drum playing brother Tim, they were joined by bass player Mike Crisp and formed this tight little trio. The ten numbers here contain a wide and varied number of influences including Blues, R&B, Rockabilly, Soul, and hints of Motown, which combine to give a more than enjoyable musical performance.

Good Bye Baby Blues is a wonderful example of Chuck Berry’s insistent guitar work combined with raw Rockabilly urgency. Creepin’ After Midnight happily funkily swings with a Chicago club feel. A more nuanced late night feel is felt with the slow burning Over You, a thoughtful and emotional paced guitar brings to the surface the abject feelings of loss and isolation. The combined assets of Dennis Lansing’s swinging saxophone and Ben Jenkins harsh harmonica only further propels the vintage sounding rocker that is She Wants To Rock, while frantic guitar solos ride over the top which only adds to the fun. The mellow swooning crooning Back In My Arms delivers yet more joy with a pleasant swaying brushwork and thoughtful emotive guitar picking.